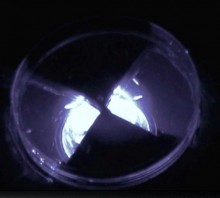 A group of German scientists headed by Prof. Klemens Störtkuhl have imparted fruit fly larvae with one of the coolest new genetic traits I’ve heard of today: Synesthesia. Specifically, these larvae can smell light.

With the goal of learning more about the operations of the neural network, these researchers from Bochum and Göttingen have worked to activate specific receptor neurons in the larvae. All 28 olefactory neurons are capable of producing a protein that can be triggered by light, so the scientists had to choose whether to be cruel or kind. Depending on which neuron was activated, the fly would have a very different response to the light. One cell might trigger an odor that repulsed the fly, while another might trigger an attractive scent.

The scientists chose to be kind though, and found a neuron that makes the blue light smell like everyone’s favorite yellow potassium source, bananas! That’s right. These lucky few flies actually smell bananas whenever there’s a blue light around. That’s awesome.

They haven’t even made the move to adult fruit flies yet, so human tests are decades away at least. But in a dystopian, Dollhouse-inspired future, can you imagine the possibilities? Injecting someone with a chemical that genetically modifies them to smell feces whenever there’s natural light would be the new whoopie cushion. Or you could inject yourself to make natural light smell like cinnamon rolls!

So hurry up, German scientists! I’m holding a flashlight under my nose in anticipation of your future achievements.