Make Room for the Frenemy: The Need for Complex Interaction Between Women on Television 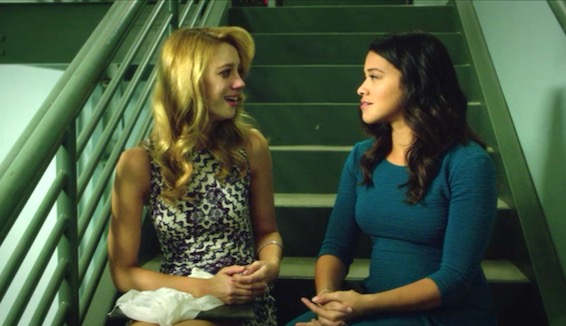 When the discussion of inclusion in entertainment focuses on women, the conversation tends to veer towards the need for more visible female friendships. It’s an essential topic point; good representation should extend beyond our mere presence and show our varied interactions and relationships. Furthermore, including our ability to find companionship in each other flies in the face of outdated notions that women are incapable of something as simple as liking other women. Friendship, in general, is vital, and seeing these connections can serve as a small affirmation that we are deserving of love and support outside of romance.

The problem that we tend to encounter with the dialogue surrounding female dynamics in television is that it’s often presented in a binary fashion, a clear good (think Abbi and Ilana’s lovingly tight bond on Broad City) versus evil (like Revenge’s Victoria Grayson and Amanda Clarke). There are fantastic stories that exist at both extreme ends of this spectrum; however, that still leaves so much undervalued middle ground, where opposing colleagues and frenemies alike dwell to suss out the complexities of their relationships. Yes, watching best friends leap into hijinks, arms linked, can be very fulfilling and just as entertaining as two titans loudly clashing for ultimate power. Still, there’s plenty of room in entertainment for the interactions that live in that deliciously human gray area. Thankfully, we’re seeing more of that on television, little by little.

Two of my favorite tension-riddled, loosely defined friendships to witness weekly are on Jane the Virgin and Scandal. Jane Villanueva and Petra Solano’s alliance tends to oscillate from nonexistent to, at minimum, a solid understanding. Admittedly, there was a time when I would watch Petra’s survivalist outlook confront Jane’s moralistic rigidity and wish for the day that they would “set it all aside and just become besties.”

Now, I’m far more engrossed in a pair that has managed to capture the sometimes-muddy bonding point that is motherhood, which can be a source of solidarity one moment and anxiety-inducing judgment the next. Olivia Pope and Mellie Grant have developed an accord strengthened by a shared ambition after years of (very understandable) strife. There is no limit to how many times I can watch these two women share a jug of moonshine on a bathroom floor after a long day of bumping heads.

What I love most, though, is the rebellious nature of this dynamic and other relationships like these. There’s something very freeing about watching Jane and Petra or Olivia and Mellie not conform to the familiar call to be agreeable, even with each other. Perhaps it’s the sight of seeing women confidently stick to who they are while finding ways to work with and learn from each other, without the need of a clear friendship. When you step outside of the all-or-nothing mentality that often informs the female interactions we see in TV and film, we’re left with awesome possibilities.

Misty Knight and Claire Temple in Netflix’s Luke Cage, for example, even come to a physical impasse in the middle of the season when neither are willing to shrink their headstrong personalities in a stunningly bare interrogation scene. Despite the altercation, that still doesn’t prevent either of them from from helping each other survive near-fatal circumstances at the hands of Diamondback. Even in the closest of friendships, like that of Rae Earl and Chloe Gemell in My Mad Fat Diary, some of the most emotionally rich content can come from the rifts in the bond. We learned so much more about how Rae dealt with obstacles during her mental health journey—such as insecurity—when she was at odds with her best friend. The audience can be left with a far more substantial story from two people that may not see eye-to-eye instead of just relegating connections to either “positive” or “negative.”

There are times when it can feel like we’ve tapped the well of onscreen female interaction. We’ve been entertained thoroughly by the women who are thick as thieves. We’ve reveled in the venom spewed by ladies who are sworn enemies. And while there is still plenty of phenomenal creativity that exists in those two realms, we’re now in an exciting time where our shows are slowly developing alongside the discussions surrounding representation. I see this when I look at each of the my complicated female pairings—most of which began over the affections of a man—and witness their own evolution towards something far meatier and more grounded in their individual personalities. If they’re not the best of friends, that’s okay. There’s plenty of room in television for relationships as complex as we are.