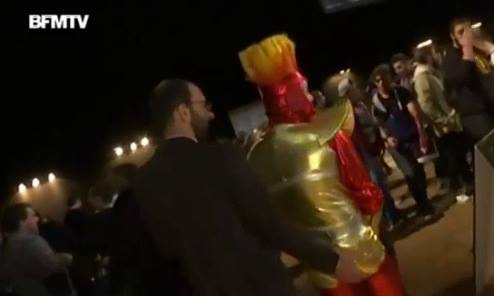 Grab your barf bags for this one, folks. A French journalist covering Comic Con’s event in France groped a cosplayer on live television. Go ahead, read that sentence again. We can’t believe it, either.

According to BuzzFeed, here’s what happened: French journalist Rémi Perrot was doing walkaround interviews of cosplayers at a Paris Comic Con event. The interviews were being recorded live, and Perrot was, for the most part, doing some pretty okay interviews. That all came to a screeching halt when he approached a cosplayer dressed as DC’s Firestorm. To get the cosplayer’s attention, he reaches out and straight up slaps his butt.

Yeah. Gross, right? Perrot can be heard saying, “You’re a pretty one, you know?” The cosplayer is taken aback but agrees to the interview anyway.

The backlash was swift. Across multiple channels, folks called out the journalist, reminding everyone that cosplay is not consent.

Of course, Perrot did what most people do when they get called out for being gross: he apologized “if he hurt your sensibility.” In a status posted to Facebook, he claimed that the cosplayer agreed to the act.

Hello. I’m the journalist. I’m sincerely sorry if I hurt your sensibility… Just so you know, Mr. Firestorm agreed. I had his agreement and he was proud to be on French national TV… I’m working in culture, for an offbeat topic (I know it’s surprising for the BFMTV channel) but I don’t despise the cosplay universe. Every person I met at Comic Con was friendly and welcoming. But next time, I’ll just tap on the shoulder if you prefer (If that will stop people insulting me). Have a good day.

I somehow get the strange feeling that he still doesn’t quite get why people are unhappy with what he did. Anyone else get a “sorry you were offended” vibe out of this, too? Interestingly enough, this statement is at odds with what Robert Negrin, the cosplayer, said in a statement to BuzzFeed:

I think he apologized in French and asked for an interview. I’m a carefree spirit; coming from the USA I’ve been able to attend to several huge comic conventions, and the art of dressing up in cosplay generates attention.

People always want to take photos with you and hug you and sometimes even touch you without permission, but that’s where, as cosplayers, we need to put a stop. I’m not saying that it is OK to do it, but to me, it is not a big deal, and it’s not like he did it in a really bad way.

Let this be your reminder, just in case you needed it: cosplay is never, ever, ever consent. Full stop. End of story. It doesn’t matter what you’re doing or who you are; if you’re touching someone without their permission, it’s not cool, and most of all, it’s freaking gross. Knock it off.