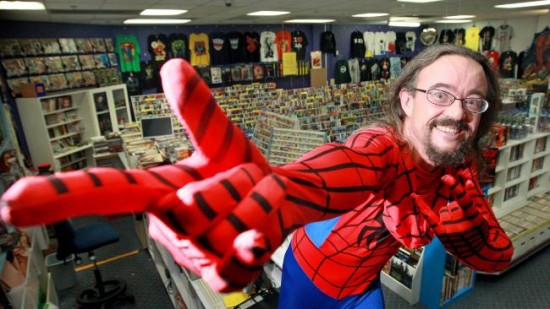 It is worth remembering that while you can pick up a lot of free comics on Free Comic Book Day, the holiday does not mean that everything in the store is free.  This subtle nuance was apparently lost on one Australian man, who tried to make off with a $160 (in Aussie money) volume of the X-Men Omnibus.

He was stopped in his tracks by, I kid you not, Spider-Man, The Flash, and two Jedi.

The part of Adelaide’s Friendly Neighborhood Spider-Man was played by store owner Michael Baulderstone.  He explains:

We had about 40 people dressed up as their favourite superheroes to celebrate International Free Comic Day, so he didn’t have much of a choice but to hand the X-Men Omnibus back after a little bit of a scuffle.  I’ve had a look at the security footage and it shows Spider-Man running down the corridor of the shop, grabbing this guy, hauling him off.  Everyone in the store thought it was a play, that it was street theatre of some sort. It wasn’t until I said `Call the police’ that people started to realise.

The Flash and the two Jedi were simply some of those fans, who stepped up to Baulderstone’s call for “people to stand near the door.”

It was a bit serious at the time, but now we’re looking back laughing at what greeted police when they arrived.

Video from the store security camera is below, but be warned: Nothing will be more awesome than what is already going on in your head.

Sorry, the video is currently unavailable

(Story via Geeks Are Sexy, picture via The Herald Sun)