Free Novels and Histories About Pandemics | The Mary Sue 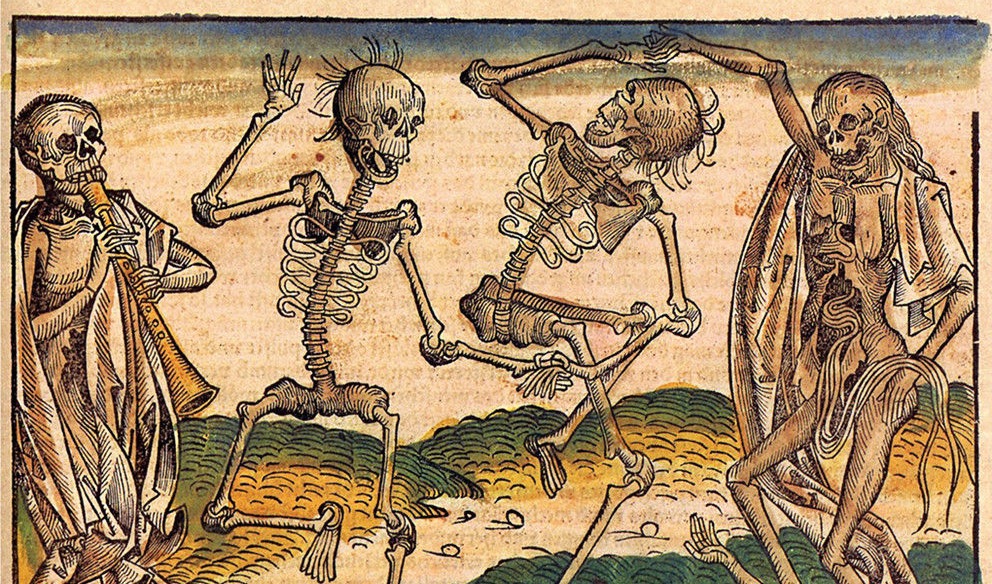 I find it oddly reassuring to read about pandemics in times past, or in fictional narratives, during this very real coronavirus stage. Maybe it’s a sense of connecting with some of the panic on those pages now. Maybe it’s relief derived from realizing that as bad as things may get worldwide, this is not the Black Death. Maybe it’s reading about the resilience and creativity of the human spirit in the worst time of crisis. I feel the world brought into sharper perspective by reading up. If you’re on the same page, here are some recommended books if you find yourself indoors these days.

I’ve long been fascinated by the Black Death, primarily the sociopolitical, religious, and artistic changes that resulted—but we have had plagues in abundance before and since, and there’s plenty to read. Let’s start with some early, early histories. Everything listed here is free to access, primarily through the magnificence that is Project Gutenberg.

In his History of the Peloponnesian War, “father of scientific history” Thucydides writes about the Athenian Plague of 430 B.C., or “The Great Plague of Athens,” which killed more than a third of the population.

“…So great a plague and mortality of men was never remembered to have happened in any place before. For at first neither were the physicians able to cure it through ignorance of what it was but died fastest themselves, as being the men that most approached the sick, nor any other art of man availed whatsoever. All supplications to the gods and enquiries of oracles and whatsoever other means they used of that kind proved all unprofitable; insomuch as subdued with the greatness of the evil, they gave them all over.”

You can read this part of The History of the Peloponnesian War here for free and the whole book via Project Gutenberg.

The Roman poet and philosopher Lucretius also touches upon the plague in Athens in his six-book epic work of poetry, On the nature of things.

For now no longer men
Did mightily esteem the old Divine,
The worship of the gods: the woe at hand
Did over-master.

The plague section is here for free, as is all of On the nature of things via Project Gutenberg.

For plague-ridden fiction from the ancient world, try Sophocles’s play Oedipus Rex, in which Thebes is suffering from a terrible pestilence.

A blight is on our harvest in the ear,
A blight upon the grazing flocks and herds,
A blight on wives in travail; and withal
Armed with his blazing torch the God of Plague
Hath swooped upon our city emptying
The house of Cadmus, and the murky realm
Of Pluto is full fed with groans and tears.

Oedipus Rex, along with Sophocles’s Oedipus at Colonus and Antigone, are also available from the miraculous Project Gutenberg. (Spoiler alert: it does not end well for Oedipus.)

Giovanni Boccaccio’s masterpiece The Decameron is perhaps the most famous work of literature to use a plague—The Black Death—as a framing mechanism by which to tell other stories. In The Decameron, seven young women and three young men have fled to a villa outside of Florence to escape the sickness that ravaged the city in 1348. They pass the time by telling each other tales. Boccacio was writing nearly in realtime; he finished The Decameron in 1353. Alongside the storytelling, there are also fascinating observations about the ramifications of a great sickness on society and standards of behavior.

Of this abandonment of the sick by neighbours, kinsfolk and friends and of the scarcity of servants arose an usage before well nigh unheard, to wit, that no woman, how fair or lovesome or well-born soever she might be, once fallen sick, recked aught of having a man to tend her, whatever he might be, or young or old, and without any shame discovered to him every part of her body, no otherwise than she would have done to a woman, so but the necessity of her sickness required it; the which belike, in those who recovered, was the occasion of lesser modesty in time to come.

You can read all ten parts of The Decameron via—you guessed it—Project Gutenberg.

A Journal of the Plague Year is a novel by Daniel Defoe published in 1722. The narrative follows one man’s experiences during the Great Plague of London in 1665. The 1665 bubonic outbreak killed an estimated 100,000 people, more than a quarter of the city’s population, in a year and a half. Defoe took such great pains to portray the events accurately that it’s often argued whether the book should be considered fiction or non-fiction; its history is spot-on.

“…in the whole the face of things, I say, was much altered; sorrow and sadness sat upon every face; and though some parts were not yet overwhelmed, yet all looked deeply concerned; and, as we saw it apparently coming on, so every one looked on himself and his family as in the utmost danger. Were it possible to represent those times exactly to those that did not see them, and give the reader due ideas of the horror ‘that everywhere presented itself, it must make just impressions upon their minds and fill them with surprise.

London might well be said to be all in tears; the mourners did not go about the streets indeed, for nobody put on black or made a formal dress of mourning for their nearest friends; but the voice of mourners was truly heard in the streets. The shrieks of women and children at the windows and doors of their houses, where their dearest relations were perhaps dying, or just dead, were so frequent to be heard as we passed the streets, that it was enough to pierce the stoutest heart in the world to hear them. Tears and lamentations were seen almost in every house, especially in the first part of the visitation; for towards the latter end men’s hearts were hardened, and death was so always before their eyes, that they did not so much concern themselves for the loss of their friends, expecting that themselves should be summoned the next hour.”

Project Gutenberg has you covered once more.

While Defoe was ultimately not writing about his own experience, Samuel Pepys was in The Diary of Samuel Pepys. Pepys, a Navy administrator and member of Parliament, kept a detailed, meticulous journal of his everyday activities from 1660-1669. These are oftentimes mundane—watch Pepys flirt with women and fret about bureaucracy—but they give an intimate look into 17th-century British life, and with the approach of the Plague, Pepys’s experiences and observations become extraordinary. As the Great Plague swallows London, Pepys is there to record its devastating effects.

So walked to Redriffe, where I hear the sickness is, and indeed is scattered almost every where, there dying 1089 of the plague this week. My Lady Carteret did this day give me a bottle of plague-water home with me. So home to write letters late, and then home to bed, where I have not lain these 3 or 4 nights. […] This afternoon I waited on the Duke of Albemarle, and so to Mrs. Croft’s, where I found and saluted Mrs. Burrows, who is a very pretty woman for a mother of so many children. But, Lord! to see how the plague spreads. It being now all over King’s Streete, at the Axe, and next door to it, and in other places.

One of my favorite Twitter accounts, @samuelpepys, has been tweeting out the diaries line by line for years. They’re currently in 1667.

This day a poor seaman, almost starved for want of food, lay in our yard a-dying. I sent him half-a-crown, and we ordered his ticket to be paid.

You can also read Pepys’ complete diary on the wondrous invention that is Project Gutenberg. Or carry one with you, you never know when it might come in handy. I was reading a copy of this book when I attended a John Oliver event years ago. Having nothing else on me, I asked Oliver to autograph the book, and he agreed. “I am not Samuel Pepys,” he wrote on the inside cover. It’s one of my more treasured possessions.

The mother of science fiction, Mary Wollstonecraft Shelley, wrote a post-apocalyptic novel, The Last Man, about a plague wiping out civilization and leaving behind, you guessed it, one last man. The Last Man didn’t gain traction when it was published in 1826 but saw a scholarly revival in the 1960s. For literary buffs, it’s chockfull of characters inspired by Shelley herself, her husband Percy Bysshe Shelley, and their pal Lord Byron. Critics at the time hated the book, calling Shelley’s very mind “diseased,” but the author thought it one of her better works.

The plague I am told is in Constantinople, perhaps I have imbibed its effluvia—perhaps disease is the real cause of my prognostications. It matters little why or wherefore I am affected, no power can avert the stroke, and the shadow of Fate’s uplifted hand already darkens me.

Guess who’s stocking Shelley at no cost to you? That’s right! Project Gutenberg!

Edgar Allan Poe’s short story “The Masque of the Red Death” got some recent traction from a Sparknotes tweet that went viral. Published in 1842, Poe’s sinister story can be read as a warning to those who revel in extravagance while shutting out the less fortunate, and the inevitability of death no matter who you are. The story concerns a Prince and his spoiled throng of friends and nobles who seclude themselves in a richly appointed abbey in order to avoid a plague sweeping the land. They’re having a great time until an unexpected guest arrives.

They resolved to leave means neither of ingress nor egress to the sudden impulses of despair or of frenzy from within. The abbey was amply provisioned. With such precautions the courtiers might bid defiance to contagion. The external world could take care of itself. In the meantime it was folly to grieve or to think. The prince had provided all the appliances of pleasure. There were buffoons, there were improvisatori, there were ballet-dancers, there were musicians, there was Beauty, there was wine. All these and security were within. Without was the “Red Death.”

Read “The Masque of the Red Death” courtesy of The Poe Museum.

I wanted to make the texts here free to access, especially in this time of widespread economic anxiety, but if you’d like to further your reading, I can recommend The Great Mortality: An Intimate History of the Black Death by John Kelly. And in fiction, there are still countless books to uncover like The Plague by Albert Camus, Severance by Ling Ma, The Stand by Stephen King, Station Eleven by Emily St. John Mandel, Year of Wonders: A Novel of the Plague by Geraldine Brooks, and many, many more.

What’ve we missed? Let us know the best fictional pandemic books and finest histories you’ve found in the comments.

(with thanks to Dr. Rebecca Ariel Porte and Project Gutenberg, image: Danse Macabre by Michael Wolgemut, 1493)