When I was a kid, Christmas morning often involved the unwrapping of a new computer game. Once all the other presents had been revealed and appreciated, I’d spend the rest of the morning sitting diligently in front of the family computer, nibbling a chocolate Santa and waiting for the game to install. This could take hours, but the waiting was important. Some games would autoplay as soon as installation was complete. I couldn’t risk missing part of the intro. And some games had multiple installation disks, which required switching when prompted. Stepping away from the computer meant the prompt would sit there unnoticed, whittling away whole minutes of play time.

I remember those mornings fondly. That level of reverence and restraint is rarer for me these days. I have mentioned this to a number of friends over the past couple weeks, especially while perusing the Steam Winter Sale. I love the Winter Sale, but it makes me aware of a shift in my perspective. I appreciated getting a new game so much more when I was younger. The idea of backlogs and cheap bundles would’ve been baffling to me (they still are, in a way). Recently, I have found myself wistful for the days when less meant more.

As it turns out, this is the perfect mindset for playing Heroine’s Quest.

In a time when adventure games are undergoing a massive (and much needed) rebirth, Heroine’s Quest: The Herald of Ragnarok feels like a relic, but a precious one. Intended as an homage to the genre’s glory days, Heroine’s Quest does more than just dress itself in pixel art and classic mechanics. This is a game with an old soul, a kind of game I haven’t seen in a long time. Forget hearthstones and quick travel. Forget quest markers. Forget puzzles with explanations. Heroine’s Quest is the real deal: a brainy, slow-paced RPG/adventure hybrid, with more side quests and inventory items than you’ll know what to do with.

I have two things to admit. The first is that I have not yet completed Heroine’s Quest. The fault is entirely my own. I underestimated how much time it would take to play through. I heard “free indie adventure game,” and assumed that I could get through it quickly. Ha. By now, I have unveiled most of the map, but have barely scratched the surface. What’s the purpose of the crystal gazebo? Of the scary castle with the dragon banners? Of the shiny thing stuck in the frozen lake, which requires the ice pick I cannot afford? This brings me to the second, more shameful admission: I have not progressed further than where I was at eleven o’clock last night because I am currently stuck on a puzzle. Stuck on a puzzle. I find this both infuriating and wonderful. I always do my best to figure out solutions on my own (what’s the fun, otherwise?), but if I am well and truly stuck, I’ll seek the help of a wiki or a knowledgeable friend. I have access to neither in this case. I am back to the behavior I exhibited in my single-digit years — pushing away from the computer in a huff, returning twenty minutes later because dammit, I can do this. 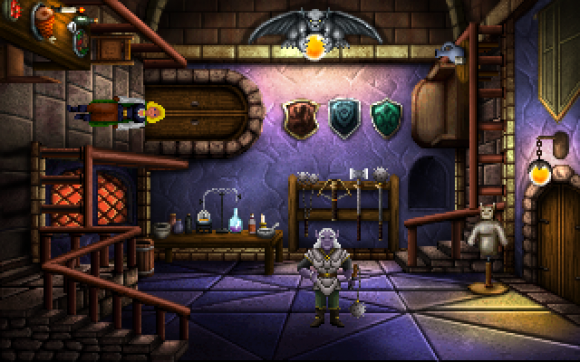 The story, as one would expect, is typical high fantasy fare, with trolls and wizards and a huge heaping helping of Norse mythology. (I have the added bonus of playing this game in Iceland, in early January. The idea of ending an oppressively long winter by means of a magical quest appeals to me.) The player has a standard choice of classes — warrior, sorceress, or rogue. Each class bestows a different array of puzzle solutions and quest outcomes, which speaks well for the game’s replayability. Combat is more engaging than I expected, keeping the player busy with finding the right times to dodge and strike. Heroine’s Quest plays like some of the best adventure games of my youth, but with the perks of rather good voice acting and appealing graphics (in stunning 320×200 resolution, no less — I recommend playing on a laptop).

As for the eponymous heroine, what’s not to like about an aspiring legend who speaks boldly of her accomplishments, trades words with monsters and witches, and inspires village children with her strength and bravery? Her gender is incidental to her heroic deeds, and that, too, feels in line with the spirit of the old days. It wasn’t until my tweens that I became aware of the notion that games were “for boys” (and there’s a reason for that). When I first encountered adventure games, I had not yet developed the quiet, gnawing worry that I was entering a place in which I wasn’t welcome. The casualness with which Heroine’s Quest features a female protagonist reminded me of another hallmark of my childhood games — a sense of effortless, innocent play.

My feelings toward Heroine’s Quest exist in a dual state. I am simultaneously delighted that this game exists, and so glad that games at large have moved on. Because yes, I’m still attached to the old days. I miss being so excited over a new game that I would sit for hours with a stack of disks on my lap, watching the progress bar inch glacially forward. There’s a sweetness to the memory of me and my little brother begging our mom to let us call the pay-per-minute help line for Star Trek: 25th Anniversary. I’d give anything to find my original notes for Myst. I think back warmly on the patience those games inspired in me as a young child. The deep, focused thinking. The devotion fueled by only having one game to play at a time. But though the old days were good days, the now is pretty awesome, too. I’m glad for quest logs, and for quick saves, and for puzzles that don’t require me to backtrack for an hour to find the one effing item that isn’t in my bursting inventory. I am glad for Gone Home, and The Walking Dead, and the promise of other innovative games rising from the ashes of the ‘90s. Heroine’s Quest has been a sentimental reminder of how games and I have grown up together. The things I’ve lost, the things I’ve gained. If you got your start on adventure games, too, I think you’ll feel the same way.

Heroine’s Quest: The Herald of Ragnarok is available for Windows, with Mac and Linux on the way.