Vampires, Zombies and Aliens in Freaks of Nature Red-Band Trailer

That's a whole lot of bad in one town. 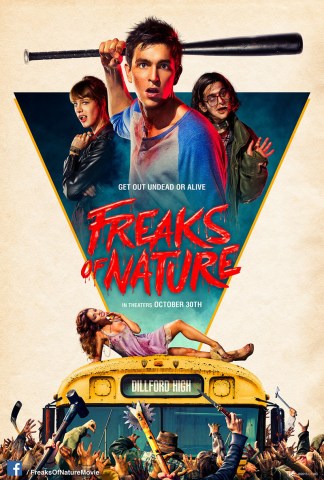 Horror flick fans, this one is for you. Sony Pictures has just released a red-band trailer for its upcoming horror/comedy film Freaks of Nature, directed by Robbie Pickering and starring Nicholas Braun, Mackenzie Davis (who you may know from her recent turn in The Martian) and Josh Fadem—not to mention names like Vanessa Hudgens, Patton Oswalt, Keegan-Michael Key and Joan Cusack. Are you interested yet?

Originally called Kitchen Sink, this film had been stuck in development hell for the better part of several years before changing directorial hands and titles—but don’t let that discourage you. Based on the film’s summary alone, I was very much intrigued by what was going on even before I laid eyes on the trailer itself:

In Freaks of Nature, we welcome you to Dillford, where three days ago, everything was peaceful and business as usual: the vampires were at the top of the social order, the zombies were at the bottom, and the humans were getting along in the middle. But this delicate balance was ripped apart when the alien apocalypse arrived in Dillford and put an end to all the harmony. Now it’s humans vs. vampires vs. zombies in all-out, blood-sucking, brain-eating, vamp-staking mortal combat – and all of them are on the run from the aliens. It is up to three teenagers – one human, one vampire, and one zombie – to team up, figure out how to get rid of the interplanetary visitors, and try to restore order to this “normal” little town.

A hierarchical structure involving vampires and zombies? Let’s not forget that’s even before the aliens decide to show up and make things even more complicated, but this also had me at the concept of monsters working together across societal lines to save their planet.

Freaks of Nature hits theaters on Friday, October 30, and you can check out the red-band trailer below—obviously NSFW, so this is a warning for language and bloody horror violence before you press play: