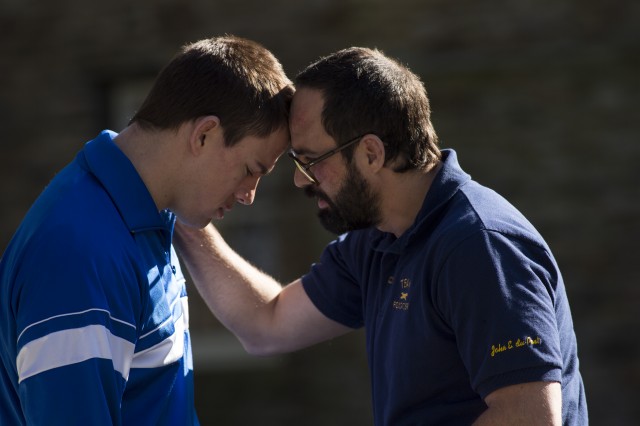 Bennett Miller has been both criticized and praised for the detailed, critical, and often cold approach he takes to the subjects in his films. He looks at people with professional obsessions which hurt their personal lives as both fascinating and tragic figures. I really liked Moneyball, and loved Capote, which I feel is his masterpiece. But despite the high praise Foxcatcher is getting as an Oscar hopeful, I found myself unable to connect to the film’s first half.

Foxcatcher tells the story of Olympic wrestling brothers Mark and Dave Schultz, who go to train at Foxcatcher Ranch, created and run by millionaire John du Pont, who took on the role of coach despite having no training. In real life, Du Pont was a paranoid-schizophrenic; and while his illness isn’t diagnosed in the film, it is apparent from first moment you see Steve Carrell thatDu Pont is a very sick and troubled man. The same can be said of Channing Tatum’s anti-social Mark Schultz, which makes for a dysfunctional and dangerous coach-student relationship. This ultimately puts Mark Ruffalo’s Dave, the one stable main character in the film, literally in the crosshairs of a volatile situation. The sense of dread which extends throughout the film’s 130-minute running time is relentless.

Bennett Miller, however, also attempts to make the film into a black comedy, which for me, undermined the film. The first half of the film is most reminiscent of last year’s Behind the Candelabra, particularly of the dysfunctional relationship between Liberace and his young lover Scott Thorson. In fact, Miller (and the screenplay by E. Max Frye and Dan Futterman) imply that the relationship between Mark and John did get very personal – though how far is never made explicit to the audience. Miller also attempts to infuse a lot of humor into the film, but it’s all cruel humor. We are made aware so early that this relationship is between two mentally unwell people, and there is a sense that Miller and his screenwriters are taking delight in showing this relationship; a relationship which is ultimately closer to domestic abuse. The lack of empathy the filmmakers have for their characters is off-putting as a viewer, suggesting we are watching a film exploiting tragic events.

This criticism of exploiting tragic events for the benefit of an artistic pursuit was the very point of Miller and Futterman’s Capote, which makes this approach even more noticable. The first half of the script is largely where I felt the problems existed, because the comedic attempts felt so out of place for such a maudlin film. Foxcatcher finally finds its emotional core, and a sense of compassion, when Ruffalo’s Dave becomes a major player, and is able to critique the trouble he (and the audience) have witnessed. The script’s narrative, which is directionless for the first half, finally begins to come together with (slow) momentum towards the inevitable finale. And Ruffalo’s performance provides a sense of humanity we were lacking. I can’t overstate how good Ruffalo is in this performance (his best in years) and he is truly one of the best supporting actors of the year, as he elevates both Tatum and Carrell’s performances when in scenes with them.

The two actors likely to battle for awards this season, and to unfortunately to box Ruffalo out, are Carrell and Tatum, both of whom are good in the roles, but seem miscast for a film by Miller. Carrell goes through a transformation for the film, a reason the film is getting so much press; but for me, it goes too far. Carrell is at his best when he can play characters rooted in reality; even when he’s playing comedic characters with a deadpan obliviousness. Here, he is asked to use an affected accent, look pale and sickly, sit with a slump, and wear big fake nose. I have no doubt that Carrell embraced the challenge and even used the physical to inform his performance; but it is to such an extreme that it begins to feel like an obvious performance which detracts from the film as a whole. Had Miller and Carrell tackled the performance with a bit less focus on physical qualities and featured John a bit more with his assistant or mother (Anthony Michael Hall and Vanessa Redgrave in thankless roles), Carrell’s performance might have been a bit more seamless, and felt less like a gimmick. 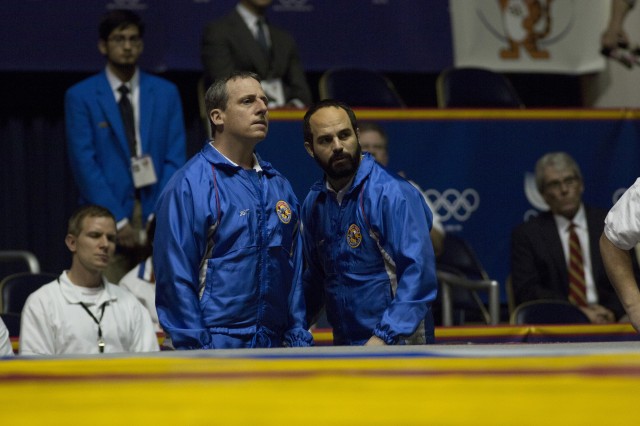 Tatum is stripped of his signature charisma to become a stoic character, but that lack of natural charm also depletes him of any warmth audiences might have for his character. According to Miller and the cast, the real-life Mark is an emotionally open, warm, and vulnerable man who worked with them on the film. That aspect of Mark’s personality is never apparent in Tatum’s performance. You may have sympathy for Mark as a damaged character (as a fellow human being), but is very hard to like him, as he acts like a moody teenager in desperate need of some tough love and honesty. We never see what draws John and Mark together (Carrell and Tatum have very little on-screen chemistry), which makes both seem aware of their manipulation of the other for personal gain, along with their mental problems. This is unfortunate, as the heart of the film, and the most interesting aspect of the film’s narrative, is the brother’s relationship, which is short-changed to devote more time to Du Pont.

Few times have I found a film’s rewrite to be so apparent, partially because of the way the film is clearly divided. Frye and Miller are both award-winning screenwriters, but as collaborators, their work feels fractured, like two episodes of a TV show by wildly different writers. Frye is best known for his screenplay for Something Wild, which successfully transitioned from screwball sex-comedy to thriller. His ability to create such a tonal shift is one of the ways in which Frye succeeds, which makes the film’s flat comedy and inability to make a successful tonal shift all the more disappointing. Futterman is an Oscar nominee for Capote and writer/producer of In Treatment. He is skilled in creating empathetic psychological dramas, but Foxcatcher lacks Flutterman’s usual awareness of psychology and humanistic touch.

As for the direction, Miller is yet another director who succumbs to the “too long” film this year. Even if he wanted to maintain the slow, deliberate pace, there is editing that could have been done to cut at least 10 to 15 minutes out of the movie. It also would have limited the amount of time that we watch a film which is meant to have a deliberately sickening, sterile look, which at 130 minutes, began to actually make me feel a little sick. That might be the intention, to filter the image through the eyes of these mentally ill characters; but at 115 minutes, I think I would have still gotten the point. The film’s visual and sound design is muted to the point of feeling unreal. The cinematography, which makes everyone’s skin tone look sick and yellowed does not suggest an attempt to stylize the film, but rather is a blunt force to instruct the audience in that what they are watching is serious.

The question that I left Foxcatcher asking is “why did this story have to be told this way?” The events which took place at Foxcatcher Ranch were certainly fascinating, although perhaps more fascinating as a documentary (Miller directed the documentary The Cruise). But the bigger issues in the film are so obvious and have been told so much better that the reason for putting yourself through the depression this film ultimately causes (which offers no catharsis) is less apparent. Despite claims that the film is some bigger commentary on old money or America, it seems more of an attempt to justify a film that waffles between being heavy-handed and absent.  Is this the story of the fractured mind of Du Pont, destructive co-dependent relationships, or the tragedy of brothers? I don’t know, and I don’t think the filmmakers knew either – and they certainly don’t go deep enough with what should be an emotionally devastating film.