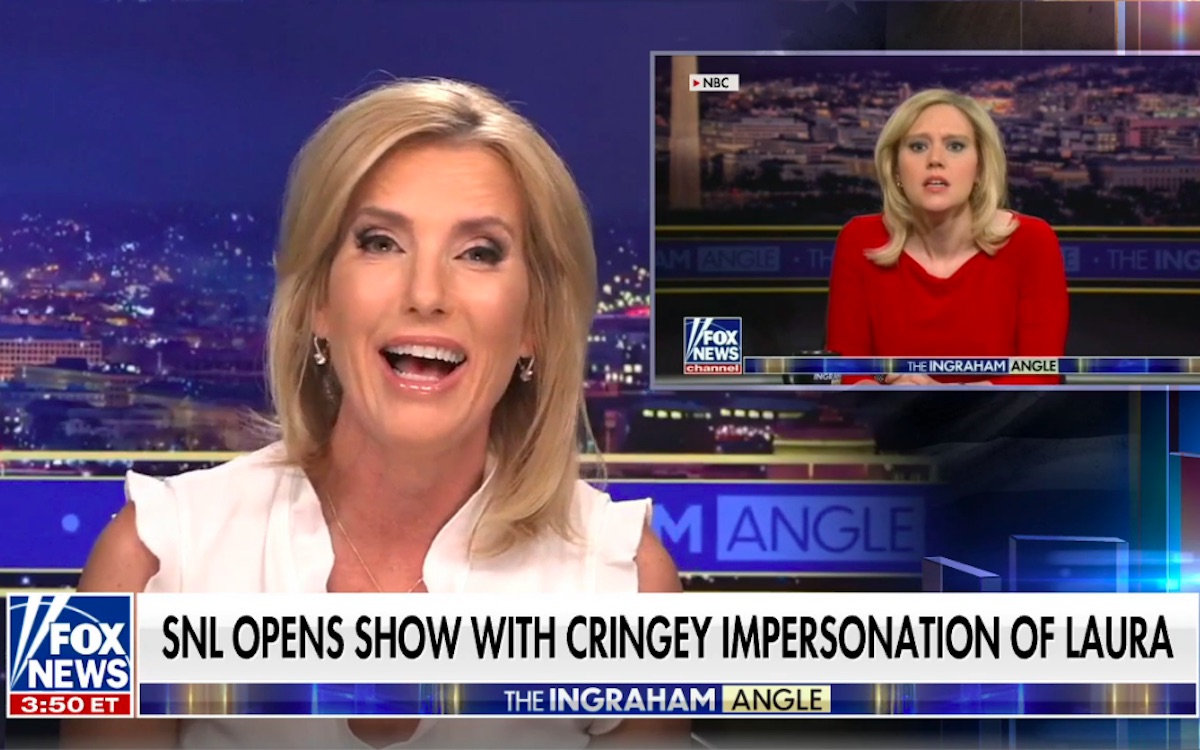 On her show Monday night, Fox News’ Laura Ingraham responded to Kate McKinnon’s Saturday Night Live impression of her. McKinnon has been doing Ingraham on SNL for years so it’s not clear why the Fox News host has chosen just now to finally react. It’s clearly not because she’s been taking her time to workshop her response.

With a vacuous smile and a strange kind of slur in her voice, Ingraham said she likes McKinnon’s impression “cause she’s kinda fun,” before sarcastically saying she has “so much respect for her” because she’s “even-handed” in her comedy.

Ingraham also suggested that the show ignores the “low-hanging fruit” of Democratic politicians like Joe Biden, Nancy Pelosi, and “the Squad,” making it pretty clear she doesn’t actually watch the show.

Ingraham then offered to go on SNL to show off her Pelosi impression—again, not seeming to realize that the show already regularly skewers Pelosi, as also played by Kate McKinnon. And if Ingraham’s Pelosi impression is anything like her impression of herself (or any of the other cringe-worthy attempts at comedy we’ve seen from her show over the years), I’m guessing Lorne Michaels is going to stick with the professional comedian.

Ingraham wasn’t the only right-wing pundit to react to an impression of them this week. Candace Owens, who is apparently too busy performing her extreme transphobia and general miserableness to learn how to Google, tweeted “Hey
@nbcsnl—not sure who this woman is you have playing me but I am much better looking than this,” along with a picture of Ego Nwodim from the same Ingraham Angle segment that sent Laura into her attempt at comedy.

Like Ingraham, Owens also offered to come on the show—something literally no one has ever asked for. After issuing that both petty and erroneous insult about Nwodim’s appearance, Owens wrote, “Next time just reach out and I’ll play myself. That way the skit will actually be funny and America might even tune in to the show again!”

But you’re not, tho. On looks or funny you cornball lmaoooo https://t.co/qf9RC7Cat9

No matter your opinion on the current state of SNL, I think we can all agree that nothing would be less successful in making the show funnier than to add Candace Owens (or Laura Ingraham) to the cast.

Say something that’s actually true, Candace! Something like “This can’t be me! I have the energy of a person everybody ignores in group chats and family events”