Soon Fox will be canceling things before they're even pitched. 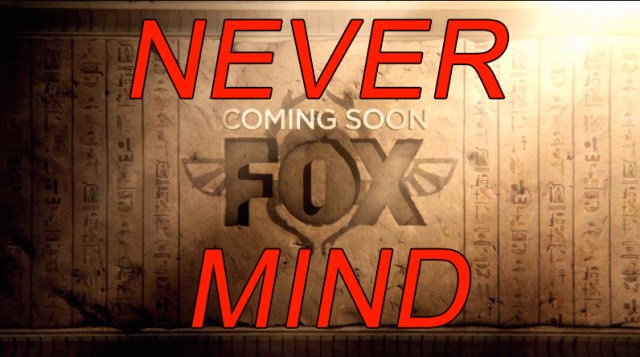 Hieroglyph, we barely knew ye. We’ve been keeping our eye on the upcoming show by Pacific Rim writer Travis Beacham, because… well, because it’s by the guy who wrote Pacific Rim. And because it’s one of the few projects in the current glut of Egyptian/Biblical mythology/history projects to have a cast that’s not 90% white people. And because it looks ridiculous, if not necessarily in a good way.

Alas, we’ll never know if the bonkers was going to be good or bad, because Fox decided, nah, we won’t run it after all. Via Deadline:

Fox said tonight that it is not moving forward with the midseason action-adventure drama it ordered in October. The network picked up the project straight to series so it could spend pilot money across multiple episodes but subsequent scripts and stories weren’t coming together as hoped.

If Hieroglyph really was going to be a hot mess (because of course Fox has an impeccable record as far as recognizing good storytelling is concerned) I’m glad the world avoided being subjected to it, but… damn, kinda late in the game to cancel it, huh Fox? You picked up the series. It had a trailer.

Hieroglyph meeting its maker before anyone actually gets a chance to see it is sad, but it’s definitely not enough to bring the Pacific Rim fandom down from its current sequel-related high. It’s actually happening, yaaaaaay!