An Animated Axe Cop Series Is Coming, But Will It Also Be Written by Awesome Five-Year-Olds? (Spoiler: No.) 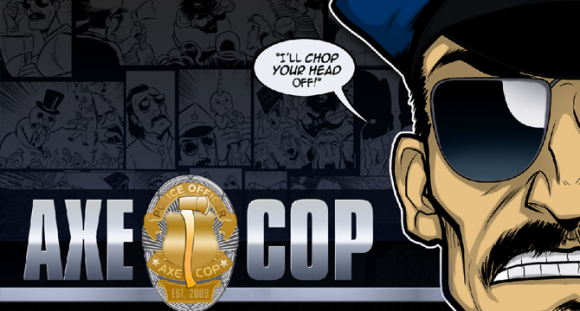 Axe Cop, the web comic created by then-five-year-old Malachai Nicolle and drawn by his older brother Ethan Nicolle, will be adapted into an animated series for Fox‘s upcoming late-night animation block, Animation Domination HD. The series, which started out as a series of Facebook posts in 2009 before it became a Dark Horse title, will possibly hit the air in the 2013-2014 season. Cartoons for grown-ups = good news always.

Fox made the announcement today, with the head of Animation Domination Nick Weidenfeld providing the good news and some details about the show. The network will produce six 15-minute episodes that will also be available for viewing online and other digital platforms. A former executive at Adult Swim (which was also eyeing Axe Cop for a series), he said that he’s ready to bring the comic’s irreverent tone and non-continuity to the small screen and turn it into a real live TV show:

“It’s rare that you find something that feels both so new in its tone and content but also so fully formed,” he said. “To me it was very clear that ‘Axe Cop’ has potential to be a larger franchise.”

The origin story of the comic itself is already the best idea that everyone else wished they’d thought of first: a professional cartoonist, Ethan decided to start drawing the stories his five-year-old brother Malachai was coming up with. Those stories revolve around a cop who prefers to use an axe for a weapon. In his travels, he comes across an array of characters like dinosaurs with superpowers, cops that turn into dinosaurs, the Uni-Baby and her father, Uni-Man, the Ninja Moon Warriors, and even Dr. McNinja, in a special crossover story. From its initial posts on Facebook, it became its own website in 2010, then caught the eye of the Gotham Entertainment Group, who helped the elder Nicolle hook up with Dark Horse Comics. It’s won awards and inspired fan movies and a video game. The rest is axe-wielding history, and now it will become “official television.”

However — written by a kid, created from kid logic, and set for a programming block for adults? How is that fair? I hope they get to stay up late.