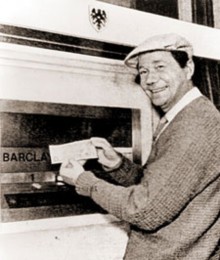 Many banking customers today barely interface with human tellers at all unless it’s absolutely necessary thanks to the ATM, but the original automatic teller machine, invented by an Armenian immigrant named Luther George Simjian, may have been a little too ahead of its time. Beginning in 1939, Simjian filed 20 patents on what he called the Bankmatic Automated Teller Machine.

But after a 6-month trial of the device, Citibank’s predecessor bank, the City Bank of New York, opted not to continue due to lack of customer demand. Which isn’t to say that the original ATM didn’t have its early adopters, but they weren’t exactly the kind the banks wanted.

It seems the only people using the machines were a small number of prostitutes and gamblers who didn’t want to deal with tellers face to face.