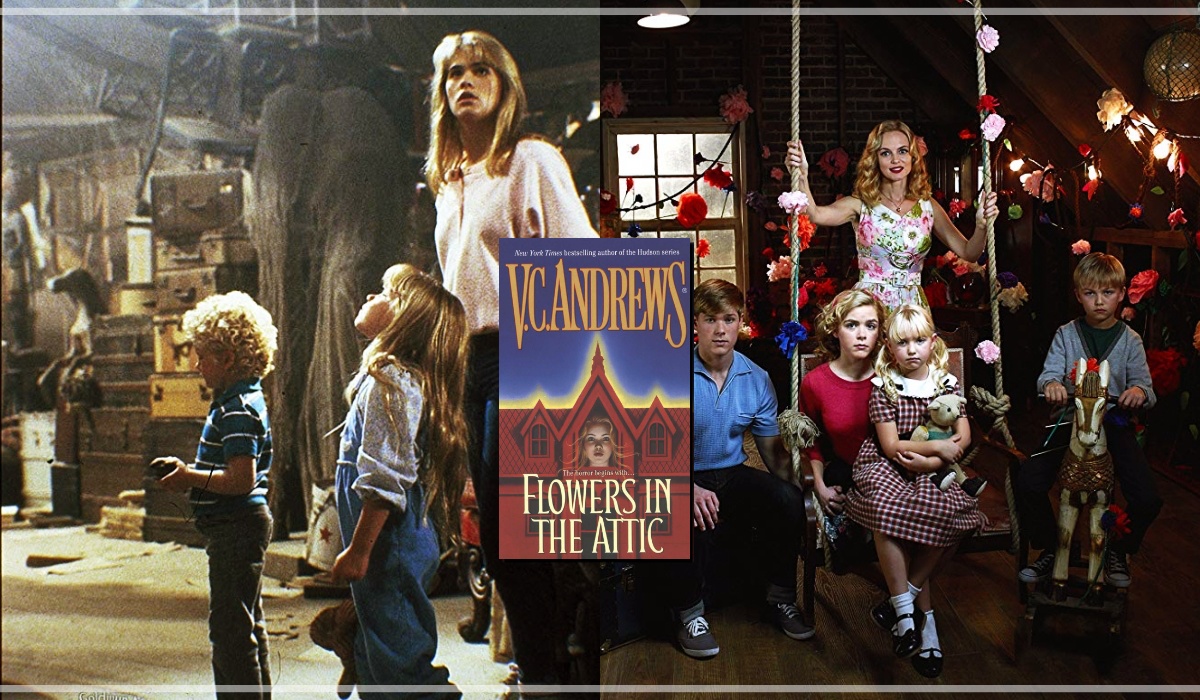 **Full-on spoilers for Flowers in the Attic.**

In 1979, V.C. Andrews published Flowers in the Attic, a gothic horror, young adult family saga that would be part of the Dollanganger Series. It tells the story of Cathy, Chris, Cory, and Carrie Dollanganger, the whitest children on the face of this Earth, who, after their father, Chris Sr., dies, are imprisoned in an attic by their mother, Corrine, and their god-fearing grandmother.

Flowers in the Attic is about their entrapment, the death of one of the children, and their final escape. The following three books deal with the emotional trauma that has been left behind, especially with the character of Cathy, who serves as our protagonist and overall narrator of the story.

It is mostly known for incest.

Back in my undergrad days, I decided that, since it was such a staple of the gothic teen genre, it was time that I read it and properly understood what all the fuss was about. Plus, it was right before Lifetime decided it was going to do the entire book series with Academy Award Winner Ellen Burstyn as the evil grandmother character (a fun fact: the evil grandmother has been played by not one, but two Oscar winners, as Louise Fletcher took on the role in the ’80s version).

While reading it, I was completely sucked it despite feeling like the book was too repetitious, because there was something gothic and honest about how you were watching these characters spend three years in captivity because of their mother’s incompetence. I flipped through the book over the weekend, and I felt like the book is not amazingly written, and it has a lot of scientific and biological things that do not make sense, but we are seeing a teenage girl experience some horrific things and try to be brave and smart in spite of it.

Cathy isn’t a great character, but she is a good point of view to watch this story from. She is smarter than her other siblings and sees through her mother’s weakness, but is also forced into a maternal position, which stops her from truly being able to rebel in the way she wants. As the reader, we see Cathy go through sexual maturity in one of the worst possible situations, along with her older brother, and it leads to the aspects of Flowers that are the most infamous.

As stated before, the incest is what is most known about the book, but despite the way it is heavily softened in the adaptations, it is rape. Chris overpowers Cathy, and it is very very dubious consent. Plus, he is possessive of her when she shows any sexual interest in another man. However, when you read the books, you see that the incest between these two siblings is really only the tip of the incest iceberg.

First of all, the parents in the books are niece/uncle to each other (and later, if you read Garden of Shadows, you discover that they are actually half brother and sister, but they didn’t know that). Then, it’s implied that Corrine’s father had a sexual interest in her and that Chris Sr. had some weird incest feelings for Cathy. So, the beautiful, perfect Dollanganger children are products of very close incest. Chris Jr. has weird sexual hangups about his mother, which he then projects onto Cathy. It’s all really messed up.

Yet, if you look at PBS’s The Great Read, you will see that Flowers in the Attic is ranked #85 on America’s most beloved novels.

It has resonated, and despite the fact that it’s disturbing and dense and just very specifically interesting, I do get it. It is the kind of taboo book that, when you read it, it makes you feel like an adult. I can’t imagine reading this book as a teenager, but I can imagine it feeling quite adult. I read the Sleeping Beauty Anne Rice novels as a teen, and boy did those make me feel like I had my hands on a powerful piece of sexy literature.

Even though I read Flowers in my 20s, I still felt like just holding it was like holding a secret. Despite not being amazingly written, it does draw you in, and the whole scenario is just so bizarre that it can’t help get you curious.

Also, quite frankly, I don’t think there is another story like this that has been told as well as V.C. Andrews told it.

I will say that if you are going to watch a version of the film, just go for the Lifetime series.

Flowers in the AtticV.C. Andrews