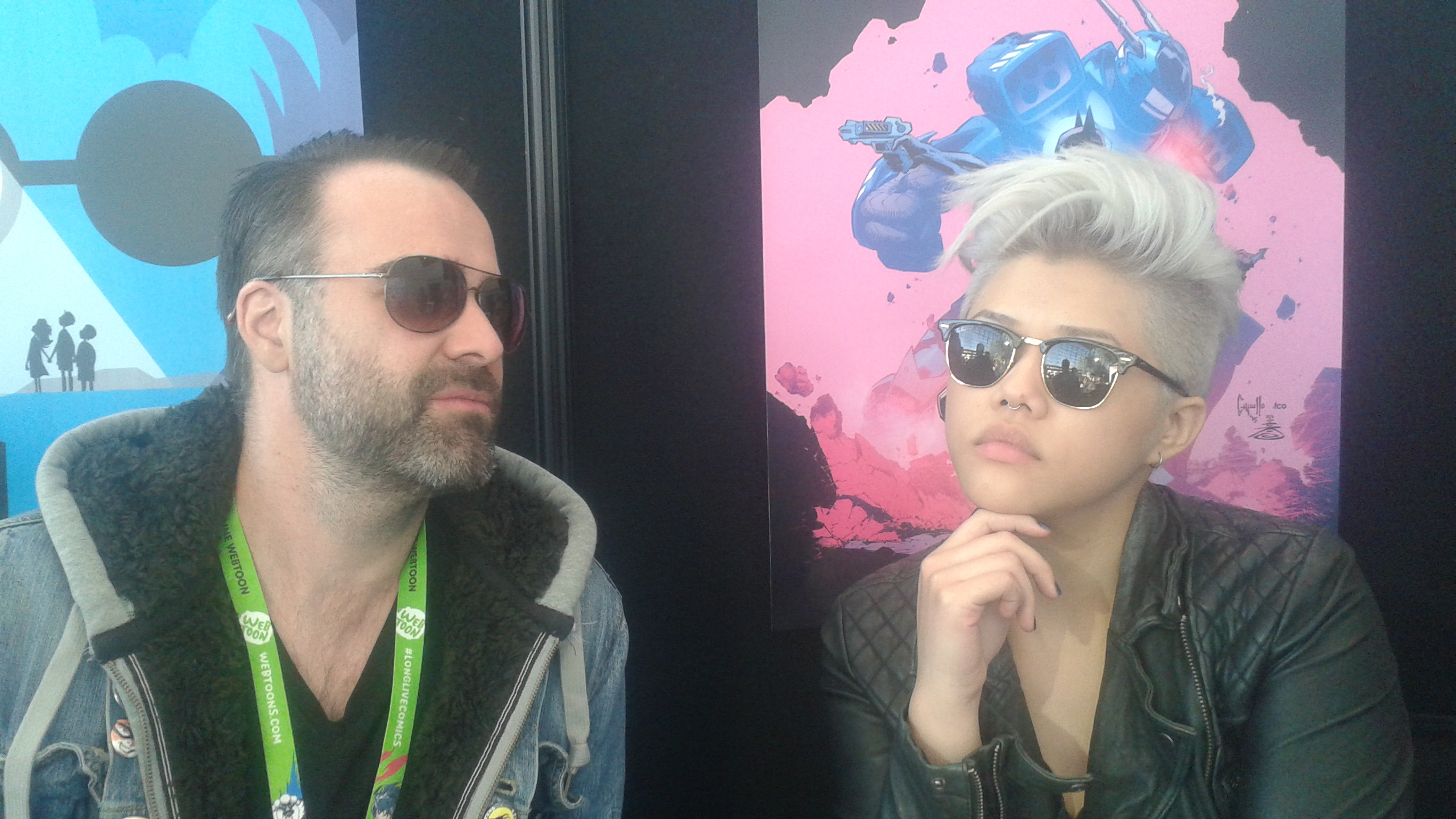 “Please caption this picture ‘a couple of assholes.'”

Way, way back at New York Comic-Con, we had the opportunity to talk to the thoughtful, hilarious, and incredibly creative Black Canary team, Brenden Fletcher and Annie Wu. Read on for their thoughts on DC You, aggression in comics, and great songs to make art by.

The Mary Sue: When we last spoke to you guys, it was right before Issue #1 came out. You guys did so much to revitalize the character. What was the scariest part of bringing us such a different Dinah?

Brenden Fletcher: For me it’s just the balance, because I feel like I’m trying to serve several masters at the same time in juggling new characters, old continuity, stuff that feels fresh, music world stuff, while still keeping it super heroic at the same time–we only have twenty pages or less per issues, it’s a lot to pack in to make everybody happy. And I’m not always trying to make everybody happy, I’m mostly just trying to make sure that Annie’s okay with everything and having a good time. But it’s always scary that I’ve put together a story that’s going to make classic Back Canary fans upset, or not read to people that don’t have a history of knowing what Black Canary’s all about. What is that balance exactly?

Wu: Like Brendan said, he did a lot of the freaking out for me.

Brenden: You reimagined so much, like you talked about  taking stuff from the music world and imposing it on superheroes. That’s a risky move.

Fletcher: When I had my first meetings about this book and I brought up Annie’s name, everyone was like “oh I get it! Now I see what this book is all about.” When you imagine Annie drawing this stuff it suddenly all comes together and it all makes sense in a way, and I can’t imagine creating this book with anyone else at this point. I mean we’ve got great fill-in artists, Pia Guerra’s doing amazing work, and Sandy Jarrell is doing a bunch of pages, their stuff is great, but Annie really established who these characters are, what the tone is, and how we can kind of juggle between the worlds of super heroics and rock and roll.

TMS: I was wondering, are you seeing the book’s specific music angle reflected in the fans? Are music fans approaching you about the book?

Wu: I also get a lot of “oh yeah, I used to be in a band” or like a roadie or whatever, and this is exactly how it feels.”

TMS: Were either of you in bands before?

Fletcher: That was my job, before writing comics. I went to school for music, and I didn’t tour a whole lot, but I have toured and this is somewhat reflective of my experience, but without the ninjas and aliens and stuff.

Wu: Thank you for clarifying.

Fletcher: I am in fact still making music now, it’s just not professional.

Wu: I’m not musically inclined at all, I trust Brendan to bring the authenticity. When he sends me pictures of instruments, I’ll trust that those are the actual instruments you would need in this situation.

TMS: This might be a weird thing to say, but I feel like you’re great at writing young women. I feel very well-represented by the book. I was wondering when you’re approaching writing a female character rather than a male character, if there’s a different process you go through, or if you approach all your characters the same way.

Fletcher: So I’ve been writing comics off and on for twenty years now, and writing stories my whole life, and I have always gravitated to female protagonists. My Gotham Academy artist and I, Karl Kerschl, we’ve got a comic we’ve been trying to get off the ground for almost a decade, we’ve got so many pages of it, and it’s about two young women, and that is where my heart is. I don’t know why. I get asked this now all the time, why do you keep writing female protagonists? And part of it is just, oh, I’m getting jobs, I’m pitching these and people are letting me do them. That’s great. But that’s the kind of story I feel like telling, I don’t know why. This has come up a lot, and I’m starting to feel like I’m examining myself and other people are talking to me about it, and there are some theories that, in the superhero world, I don’t like writing overtly aggressive people, and a lot of the male superhero characters have so much aggression that you’re dealing with. We have that in Dinah, she’s aggressive, but in a sort of motherly way, and it feels like it’s connected to a real truth behind it, whereas with a lot of the traditional male superheroic characters, it feels like it’s a kind of male aggression that I don’t personally connect to. There could be a lot of psychoanalysis about this.

Shawn Crystal actually talked to me about it in his podcast, it was like an hour and a half, I felt like I was in therapy, and he started asking me about it, and waxing poetic about my lack of aggressive attitude, it was like, ‘oh my god, Sean, I should be paying you for this!’ Anyway, I think it might come back to that, I don’t know. These are the stories I want to tell, these are the characters I like to write about, and I really connect to all the people I’m writing about in Gotham Academy, Batgirl, and Back Canary. I have to say, I feel more confident writing these characters because I’ve got people like Annie and Babs–[laughs] in brackets, fake crying.

TMS: What does DC You mean to both of you as individuals?

Wu: I think it’s great because, sometimes some people assume that we’re changing the entire line or something, but know, we’re just creating what’s better for a wider audience. So old-school fans will have what they like, and maybe people who don’t usually read comics will be able to find a way in.

Fletcher: I think of it from a business standpoint, they just needed to stop calling it “the New 52,” it had been three and a half years, so they had to call it something. It’s I guess trying to clean up the branding so that it feels like a great gateway for new readers.

TMS: What is one song that inspires you while you’re working on this comic? Or [working on] anything!

Fletcher: Well every issue is named after a song

Wu: True. I’m gonna pick two, because I’m a rebel. One would be Peaches’ “Boys Wanna Be Her,” which is a really stomping, awesome, aggressive awesome song, and the other is Azaelia Banks’ “Heavy Metal and Reflective.” Oh, a third one! Sisters of Mercy. Like, anything Sisters of Mercy.