Video Answers Question: What If Napoleon Dynamite Moved To NYC, Met A Girl, and Proposed? 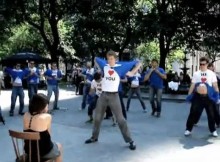 What happens when a flash mob, a circus school grad, romance, and a great deal of awkwardness combine? The video below. Our no-longer-a-bachelor in questions recruited all his friends together to stage a song-and-dance number for of over-the-top gestures, professions of love via cue cards, and a heckuva lot of Napoleon Dynamite-esque dance moves. All in bustling Madison Square Park.

If I were the girlfriend here, after the initial shock of having my consciousness displaced into another human being, I would probably feel a little bit uncomfortable. Not only is there a bad episode of Glee unfolding before your very eyes, starring your boyfriend, but there are cameras everywhere. We can only hope that she’s the kind of girl who will appreciate this years from now, even when all her friends are talking about their proposals atop the Eiffel Tower. She says (spoiler alert!) yes, though, so that’s encouraging.

Then again, it’s not every girl who gets a unicycle cameo in her proposal. That’s gotta make you feel special.

(Via The Daily What)