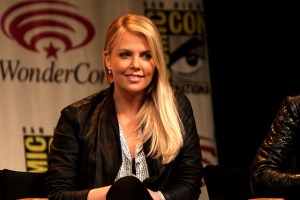 We’ve been here for Fast 8 in so many ways, not the least of which is the choice of the film to cast Charlize Theron as a fast and Furiosa (the puns write themselves) female villain who will surely butt heads with Dominic Toretto and his team. Now, the official Twitter account for Fast 8 has shared the first photo of Theron’s character, who we learn will be referred to as “Cipher”:

From the Metallica t-shirt to the ponytail and leather jacket, Cipher definitely looks like she’s not someone to be messed with as she stands next to a display of some pretty heavy firepower. One of the things I love about Theron is that she’s portrayed such a wide array of strong female characters–Cipher is clearly different from Furiosa in Fury Road, who’s also different from Ravenna the evil queen. It’s fun to see female strength take so many different forms–and all from one actress!

Fast 8 is being filmed in Cuba, and the film is set to make history from that alone–in a short video posted to Twitter for an ongoing theme called “Fast Fridays”, star Vin Diesel revealed that this is the first Hollywood movie to be allowed to film there, and it seems like the people of Cuba are welcoming the production with open arms: