Review: First Man Is a Technically Stunning Film Made at the Wrong Time 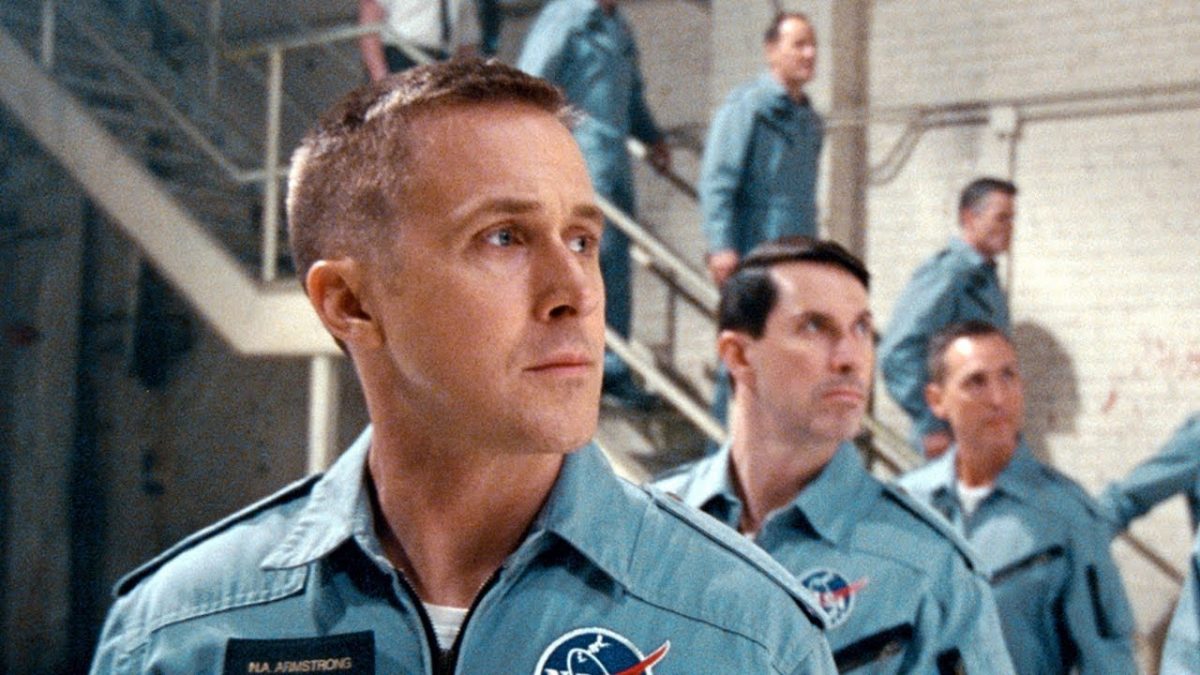 While my Twitter bio reads “100% space princess,” it is time for me to let you in on a secret: space scares me. If I must go to space, let it be on the Millennium Falcon with Rey, or on the USS Enterprise with a trusty Vulcan first officer.

When it comes to real, actual space, I find myself firmly in the Leonard McCoy camp of “space is disease and danger wrapped in darkness and silence.” So, for many scenes in First Man, “the riveting story of NASA’s mission to land a man on the moon, focusing on Neil Armstrong,” I was white-knuckling my armrests and making a series of “oh shit” faces at the screen.

For many other scenes, I sat there, poker-faced, as the older couple next to me cried. The humanity wasn’t there for me.

I should preface this review by saying that it was impossible for me to divorce First Man from the modern political climate. As I sat there, overwhelmed by the politics of the past weeks, months, and years, I found myself unable to connect with the story due to the decidedly apolitical bent they chose. I’m glad they decided against making it a story of American exceptionalism, but as with most historical films, they decide to focus mostly on white men.

Already, I can hear the fingers clacking away to tell me that the story had to focus on white men, that Neil Armstrong (Ryan Gosling) and the other astronauts at the time were mostly white and all male so what did I expect?

Well, first of all, I will say upfront that poor Claire Foy is given an incredibly thankless role as Janet Armstrong. She is there to cry and to be a reminder of the humanity that Armstrong is striving to uplift. It’s very much a role that belongs in an early 2000s biopic, and not in 2018. Foy, with a slipping accent, tries her best with the material, but she’s mostly relegated to standing in the kitchen or hovering over Gosling’s shoulder. I wanted her to be given more to work with as the family deals with their trauma, but instead she is forced into a poorly written role.

Gosling feels miscast as well. I’ve never been much on the hype train for him, though I’ve admired some of his performances in the past. Armstrong is a role that requires a lot of subtle performance based in the eyes (a cynical thought that passed through my mind during the film was that a drinking game could be proposed where you take a shot every time there’s a close up of a man’s eyes in space), and I found myself wishing an actor with a tad more emotion there. This is not to say Gosling is wooden, but I would’ve preferred a different actor in the lead.

The rest of the supporting male cast are all routine. I recognized a few faces I was fond of, including one of my favorite character actors Shea Whigham in a tiny role, but for the most part they didn’t stand out and I spent most of the film trying to place where I knew them from, or trying to differentiate them when they had their helmets on.

What did I like? Well, the space scenes are terrifically shot. Anxiety-inducing, but terrific. A little nauseating too, but that is the point I assume. We are placed into these tiny, fragile compartments with the characters and tossed into the void and it’s terrifying how these rivets and panels are the only things keeping these people from certain death. Director Damien Chazelle (La La Land) outdoes himself, and as much as this statement frustrates me, pay to go see it in IMAX for those scenes set on the moon, which capture the vastness of space and the actual moment of landing incredibly well.

However, the scenes set on Earth left something to be desired. Chazelle alternates between shaky cam and steady, classic shots for his home-set scenes, which is a somewhat jarring choice. But the biggest weakness is the script itself. I googled Josh Singer following the film, and was surprised to see that he’d written episodes of The West Wing, as well as won an Oscar for Spotlight. First Man feels like a first draft; lengthy in spots and with some serious character work needed before it sees the light of day.

And then there’s the political context, which hovers over the film like the moon. Singer and Chazelle peel away the idea of American exceptionalism, and instead leave a tale of the exceptional white man. The political climate is stripped away, referenced to in news broadcasts and one scene of protest. We are given a sanitized version of history, and quite frankly, I do not know whether it would have been worse to have raw patriotism or this whitewashed version of events.

The film relies heavily on platitudes about the future of man, of looking to the sky and journeying farther. We are treated to montages of people around the globe glued to their televisions and radios as Armstrong steps onto the moon, ostensibly to show that this was a heroic moment for mankind and that we can all be united once more. But it is a heroic moment for white men who are allowed to be the leaders of the future. Also, let’s not forget that as a white man walked on the moon, people of color and women were still fighting for their rights on Earth.

Maybe I’m being oversensitive. I feel as though if this film had been released about eight years ago, it would’ve been a decent but not memorable Oscar bait film that would’ve only grated on my nerves because people wouldn’t stop talking about it. Now, it feels as though there’s been a tonal misstep; someone didn’t read the room properly. We don’t need apolitical platitudes. We need stories that challenge us, that inspire us, and that tell us that there is a future rather than living in a moment in the past.