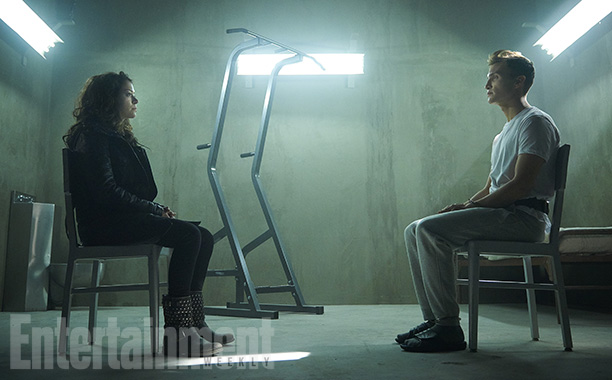 Project Leda meets Project Castor in this brand new first look at Orphan Black season three from Entertainment Weekly! Co-creator Graeme Manson has some (but not too many, of course) deets on what we can expect from the coming season. Spoilers, of course!

Though OB isn’t back on BBC America and Space until this spring, we at least have this image to tide us over. Manson says they “hit the ground running” in the premiere, with this meeting happening “shortly” after the events of last season’s finale. He’s calling it the “clone speed dating” scene, and apparently these new dude clones are “badass,” “sexy,” and “vulnerable.”

And yes, this is a new clone—this one is Rudy (though the writers call him “Scarface”), who is different than Mark, the other Project Castor clone we’ve met, played by Ari Millen. Apparently, we’ll meet a few other Millen clones this season too—though not too many. “We don’t do a lot of red shirts,” said Manson.

It’s not entirely clear what the Castor clones are up to, and Manson isn’t about to help us out with that. He does say that, naturally, “Sarah is the lynchpin. So whatever more she understands about these Castor boys, she understands more about herself and her sisters and their origin story.” And while he doesn’t get too specific, he does add that “There is always the possibility of a new [Maslany] clone in Orphan Black.”

But things are already pretty wild for our existing seestras. Manson says that,”Cosima went through something that is perhaps quite mysterious to her with Kira. The stakes will still be high on Cosima’s illness and she still has a very important role in saving her sisters, but there’s more at stake than just science this year.” Meanwhile, Rachel might not be as dead as we thought: “How deep did that pencil go?” Manson doesn’t say whether or not Tony will be returning, but he does let us know that Alison and Donny will have been “bonded by murder” and that there’s “a lot of fun to be had with the Hendrixes.”

This might sound sort of odd, but did anyone else ever read Marilyn Kaye’s Replica series of YA books from the late ’90s? They were about a group of girls who discovered they were clones (the Amys), and later in the series the ended up meeting—gasp—the Andys! This next season of OB is giving me serious Replica feels, is all I’m saying.