This Is the First Confirmed Photograph of an Alien Planet 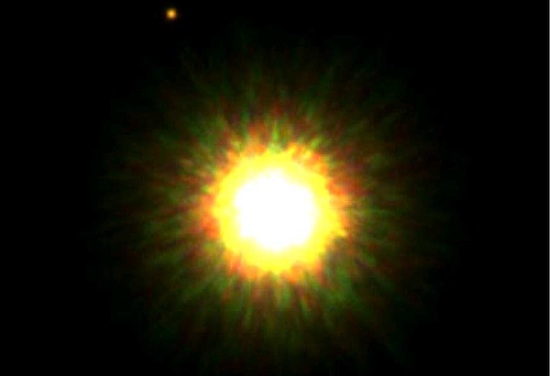 A picture that the Gemini Observatory took in 2008 has just been officially confirmed as the first direct photograph of a planet outside our solar system. While we have images of other alien planets — a.k.a. “exoplanets” — such images have been composed via indirect means of observation, such as gravitational fluctuations, rather than as true photographs.

This particular planet is about eight times the mass of Jupiter, and orbits the star 1RSX J160929.1-210524, which is located about 500 light-years away. The unnamed planet is the little orange dot in the upper-left-hand quadrant of the photograph above.

Why did the confirmation process take two years? Astronomers had to account for the possibility that the planet wasn’t actually orbiting 1RSX J160929.1-210524, but that it merely appeared to be doing so by chance. Space.com quotes the astronomer who led the research team involved as saying, “Our new observations rule out this chance alignment possibility, and thus confirms that the planet and the star are related to each other.”