How Come No One Told Me About This Adorable Queer Storyline in Fire Emblem: Conquest? 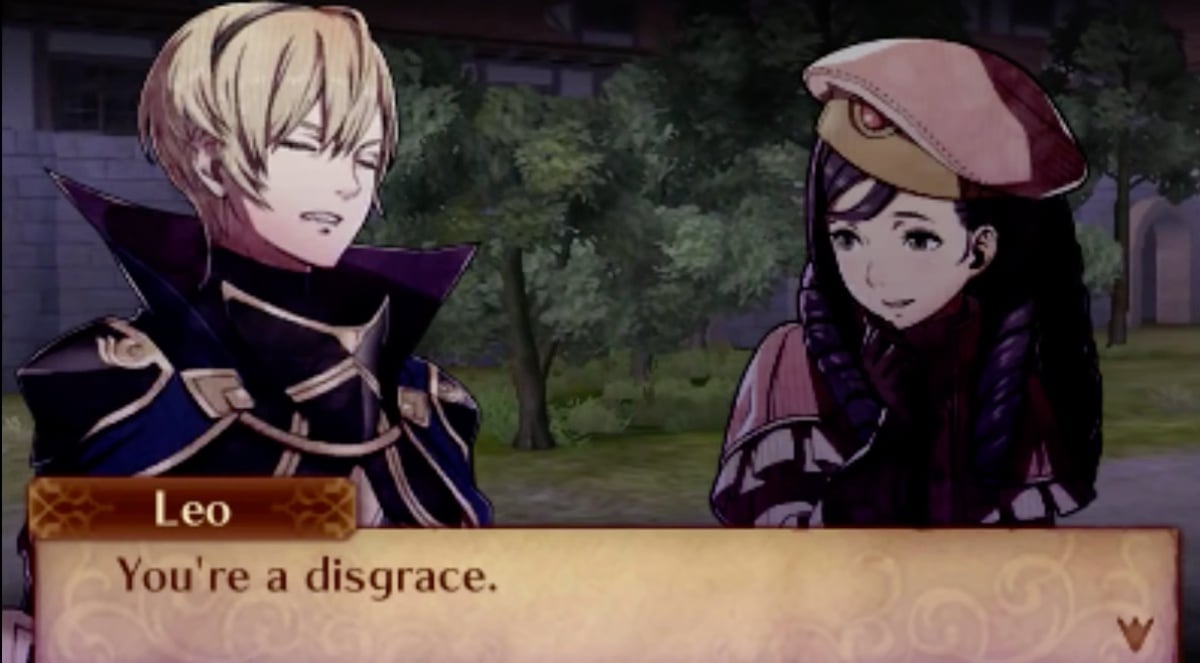 I spent this weekend sad-watching Lost and Delirious and playing Fire Emblem: Conquest/Birthright on two Nintendo 3Ds because when I get into a video game groove, it can get really intense. As I was playing, finally getting all my couples together, I started playing one of the side quests involving Leo’s son Forrest. What was just supposed to be another side-quest for me to get exp. from ended up being a really sweet storyline between an intolerant father and implied gender-fluid son (edit: I understand that some view Forrest as just ‘cross-dressing’ and I don’t mean to mislabel him, I read him as non-binary/gender-fluid. The franchise does not have any queer characters so I don’t know if that language was in the framework of constructing Forrest, but it’s how I read the character. Either way, the storyline is still positive regardless of which label.)

So for some background Fire Emblem is a popular RPG game that is currently all the rage again because of the previous game Fire Emblem: Awakening. I’ve been playing the series since they started releasing them in the States, with Fire Emblem: The Blazing Blade. The games have always had these support conversations where characters who spent a lot of time together could bond and eventually “marry.” In Awakening, they introduced characters who were children of a particular character and made it so that whatever partner was chosen would decide hair color and stats.

In Conquest, the character Forrest is always the child of Leo, a Dark Mage, a.k.a. a bit of an asshole. When he goes to visit Forrest in a Deeprealm (sidequest) with his sister Elise, he rebuffs his son because Forrest likes to wear dresses and wear his hair in a feminine fashion. Now bishonen type characters are not new to the series, but this is the first time this sort of dynamic is introduced into the series.

Leo calls Forrest a disgrace and, in probably my favorite bit, Forrest snaps back that he’s going to go back where he is appreciated. Forrest is unapologetic about his love for high fashion and his dresses. Elise also calls Leo out in being an asshole.

During the gameplay itself, the goal is to protect Forrest from bandits who will attack him and since his class is Troubadour, he can only heal, not attack. The whole reason Forrest is in this situation is that he went to get sewing materials and came across a recently attacked village. He healed about a dozen people.

After winning, a boy goes to Forrest thanking him for his help, because without Forrest’s healing all the villagers would be dead. This makes Leo realize that his son is a hero to many, and he apologizes, saying that his son is a better man than him. He asks if Forrest will join them on the quest so that they can bond and Leo can make up for being a “cold-hearted father.”

During the support conversations that take place after you recruit Forrest into your party further develop their relationship: you see that Forrest started wearing dresses because when he was a child, he wore a dress running around, and Leo said he looked adorable. That is what inspired Forrest to learn to sew, even though that skill eventually drove a wedge between them. Leo also admits his behavior was wrong and that he should have never held his son back from his passion. He even asked Forrest to make something for him.

Outside of his dressing, Leo also respects Forrest desire to protect people and fully embraces Forrest as his heir. They have a thoughtful conversation about power and legacy. It’s all very sweet and in those moments it shows what a great addition to the series these parent-child relationships are.

While the ability to create relationships in Fire Emblem is one of the best things about the gameplay, it still does not allow for same-sex romances, therefore Forrest is still a straight man. Which, while I would love for us to have the option for him to romance men and women, it is still a good representation of the fact that the narrative embraces Forrest’s right to be feminine without it making him unworthy. His bravery isn’t determined by his clothing.

Storylines like this prove how simple it is to have a non-binary story inserted into a narrative. All the parent/child relationships have some level of stress to them and Leo/Forrest is no different. It doesn’t take away from the gameplay and it doesn’t spend forever on it either. It’s balanced story with a lot of heart.

Unlike most narratives where a queer child has to prove themselves in some way to their parent, the Leo and Forrest relationship is all about Leo proving himself to his son. If you’ve never played the Fire Emblem series, I’d recommend it if only for moments like these. Now let characters be in same-sex couples!

For those who have played the games who are some of your favorite characters? What have been your favorite romances in the series? Lyn/Hector forever.