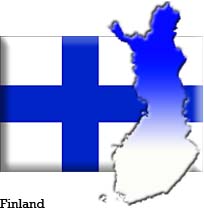 In America, we have the right to life, liberty, and the pursuit of happiness. In Finland they have all that stuff, but now they also have Internet! Yes, starting July 1 every citizen of Finland has the legal guarantee of a broadband Internet connection of at least 1 Megabit per second. And the promise has been made to upgrade every citizen to a 100Mbps connection in five years.

Finland is the first nation to make the Internet a legal right for its citizens. England has come close, promising a minimum connection of 2Mbps to all its citizens. But that’s just a promise. There is no voiced intent at present of codifying it in law.

Finland is such a happy country for Internet users. First of all, it’s estimated that there are only about 4,000 homes that lack an Internet connection in the first place, so they law won’t be costly. Second, and this is the big one, you know how they deal with illegal file-sharing in Finland? They send them letters! Like, in the mail! That’s so adorably wonderful.

And mostly, the government seems to get how important the Internet really is:

Speaking to the BBC, Finland’s communication minister Suvi Linden explained the thinking behind the legislation: “We considered the role of the internet in Finns everyday life. Internet services are no longer just for entertainment.

“Finland has worked hard to develop an information society and a couple of years ago we realised not everyone had access.”

And if the world population has its way, there may be many more countries soon enacting similar laws:

A poll conducted for the BBC World Service earlier this year found that almost four in five people around the world believed that access to the internet is a fundamental right.