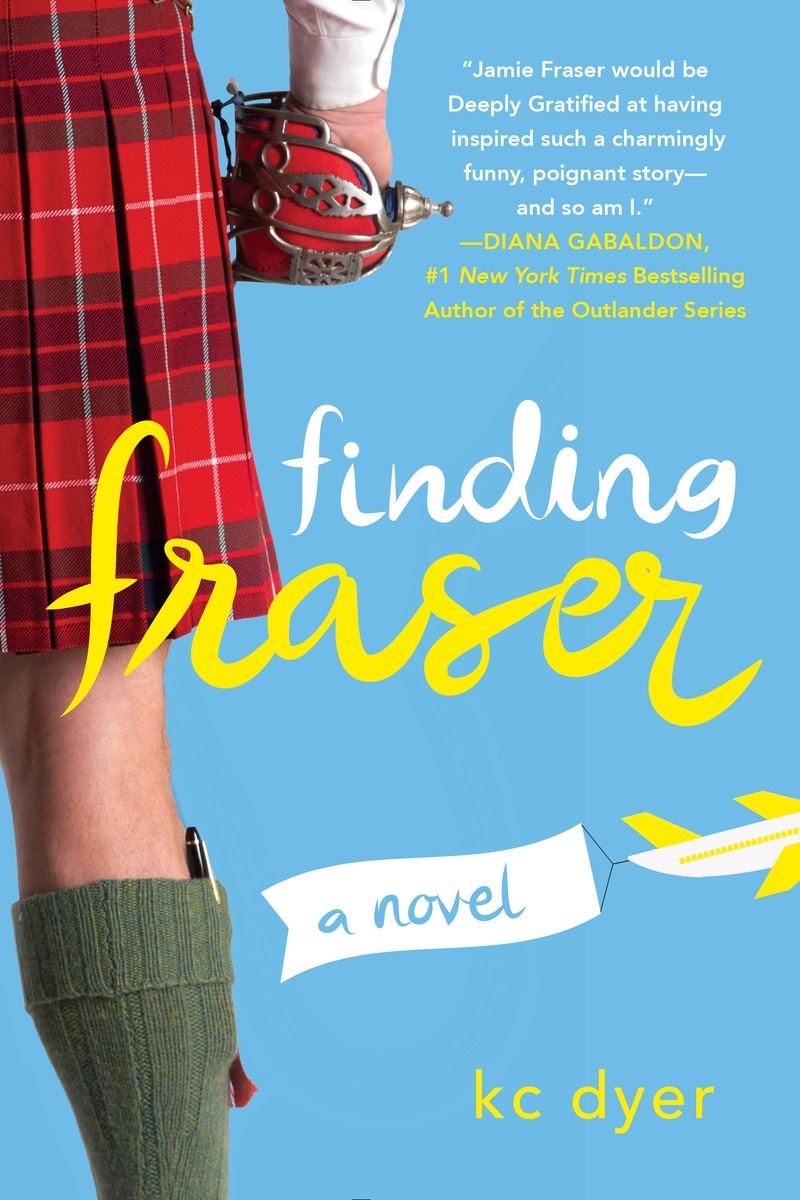 Emma Sheridan, the protagonist of kc dyer’s novel Finding Fraser, is a mess right now. Her marriage has fallen apart, she’s lost her job, and the only guy who has ever really meant anything to her is a character from a book. In a fit of desperation, she sells everything she owns and takes off for Scotland, determined to find a real-life version of her book boyfriend. Since no one is willing to go with her, she blogs about the experience along the way.

As a special treat for the readers of The Mary Sue, Emma takes a peek and weighs in on the screen version of OUTLANDER…

I met Jamie Fraser when I was nineteen years old. I fell in love hard, fast, and completely. He was the perfect man.

That he was fictional hardly entered into it.

I loved him then, and I love him now. Three boyfriends—one live-in—and an ex-husband have not changed my mind. Ten years have passed since I first met this man, yet somehow—somehow he is more important to me than ever.

And this is why, at twenty-nine years (and one day) old, I have decided to drop everything, to leave my life behind, and regardless of the cost to my wallet or my self-esteem, go forth and find my own James Alexander Malcolm MacKenzie Fraser.

Sneaking a Peek
8:03 pm
Somewhere in the Wilds of Scotland

I’m a purist, okay? I’ve never denied it. When I sold everything and set off on this journey, I had only one goal. I was going to find my Fraser – or a reasonable, modern facsimile – no matter what it took. And it’s taken – well, it’s taken a lot. So far, I’ve been robbed, propositioned by a randy gnome and chased by a naked fishmonger across a Glasgow bridge.

I may have a way to go before I know if this adventure is successful or not, but all the while I’ve kept one ideal close to my heart. The Fraser I am trying to find is the guy who walked off the pages of Outlander and into my heart.

The pages of the book. Not the screen.

I don’t know how many times I’ve read this book since I was nineteen, but I can tell you, my Fraser is fully formed inside my head, okay? I don’t need to see him on a screen to believe he’s real. Howevah… it just so happens I am typing this on a 30 minutes-for-a-pound machine here in the dark corner of a Scottish bar. A sports bar, to be perfectly honest. And on the screen above the beer taps? It’s not a rugby match. It’s not footy.

It’s Outlander, the series. Apparently the bartender is a fan.

Since it’s just you and me, dear reader, maybe I will just allow myself a quick peek. Let’s see how this screen Fraser compares to the real thing, shall we? Don’t forget, the guy striding through my imagination is one noble hero.
I’m just sayin’…

Okay, the credits are rolling and we come to the first problem: It’s Season Two. Season two! How did that happen already? If memory serves me right, that means the action has moved from my beloved Scotland across the British Channel. What’s the use of watching when the show is not even in Scotland any more? Why would anyone be remotely interested when men in kilts are not even on the screen? I mean…

Okay, okay – I’ll give you there are still a few kilts. One in particular… what’s this guy’s name? The guy playing Jamie? Cause he – uh – yeah, I’ll admit he’s pulling off the kilt.

He can pull it off for me, any time he wants!

But seriously. The show is not even set in Scotland anymore. My beloved Highlands not even on screen? Why would you even care…Holy shite – did you see that shot of Versailles? And those dresses are – well, they’re breath-taking! Claire in red is…

Well, these certainly are not as good as the dresses in my imagination, though. Nope. Not a hope. Though, I do admit, that King is pretty good casting. And his lady-love looks pretty good…wait a minute.

I – I –okay, I admit it. I’d forgotten about the pierced nipples.

Look, my log-in time is running out on this machine, so I’m going to have to go. But I think I’ve made my point, yes? Okay, I’ll admit the casting of Claire is just about perfect, and maybe the guy playing Jamie does justice to his kilt. The costumes – well, they are to die for, but the setting in Paris – come ON. I mean, who wants to look at the City of Light? And let me tell you, I know a woman with a fake Irish accent who can out-evil that Black Jack any day of the week.

Also? That wasn’t me crying at Frank’s face when he saw Claire was back. That was YOU crying.

I only cried at the sight of the pierced nipples.

Anyone would. Didn’t you…?

Sophia Sheridan, Chicago, USA:
Get a grip on yourself, Emma. What kind of weirdo fixates on fictional characters on the book or the screen? IT’S NOT REAL! You need help. Come home.

—–
kc dyer likes to walk in the woods and write books. Her most recent work is Facing Fire, a sequel to the acclaimed novel, A Walk Through a Window. Visit her website at kcdyer.com, or connect with her on social media at facebook.com/kc-dyer, and @kcyder.