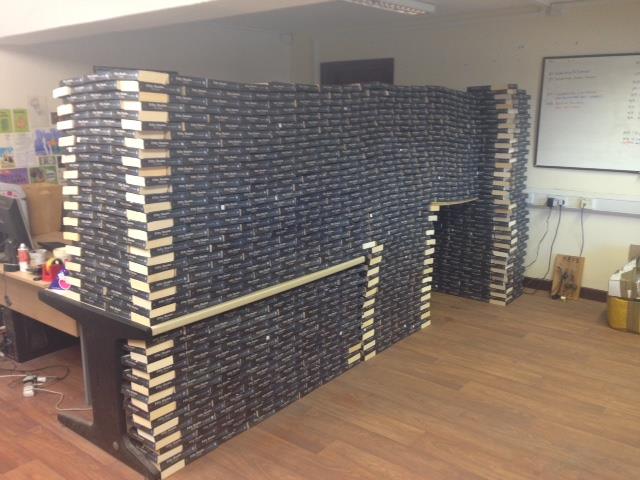 The store has received “literally hundreds” of copies of Fifty Shades books, which it’s been been keeping in a warehouse and using to build an impressive erotica fort. The pictures above were taken in September, but employee Phil Broadhurst told The Mirror that Goldstone Books is still somewhat of a “retirement home” for the series. Although the shop appreciates all the donations, Broadhurst notes that “less Fifty Shades and more Sixties and Seventies vinyl would be good […] There are a lot of people obsessed by Fifty Shades of Grey, we get people bringing in new copies coming in all the time. Enough is enough.”

Goldstone Books hopes to sell some of the copies online and recycle others, but, as of 2013 at least, it was believed that glue in the binding of the Fifty Shades books makes them unrecyclable. I sure hope that isn’t the case—I’ll be damned if these books stick around long enough for alien archaeologists and tourists from Earth 2 to think a series that romanticized abusive relationships and coined the term “puckered love cave” was the touchstone literary work of our generation.