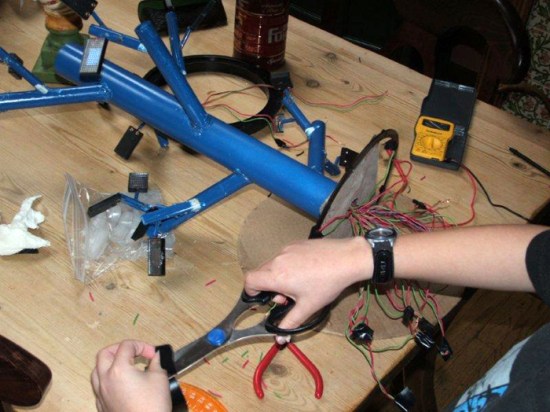 Updated content follows at the end of the story.

While walking through a forest in the winter, 7th grader Aidan Dwyer thought he saw a pattern in the way leaves and limbs grew from trees. Some photography, measurements, and investigating the work of other naturalists confirmed that plants produce new growth following a Fibonacci sequence.

This pattern, where the previous numbers are added together to make the next number in sequence (1+1=2, 2+1=3, 3+2=5, 5+3=8, etc.), and its corresponding golden ratio have been observed all over the nature world. This got Dwyer thinking about why trees grew in this way, and if there was an evolutionary advantage in doing so. He knew that trees, like all plants, use their leaves to photosynthesize and decided to make that the focus of his investigation.

To do so, he constructed a “tree” using the sequence of leaves found on an oak tree. Except on his tree, Dwyer placed photovoltaic cells instead of leaves. He compared the amount of energy collected by his tree against a normal, flat array of solar cells. His results may surprise you:

Whether Dwyer’s work is actually “groundbreaking” is probably open for debate. After all, scientists have been observing and investigating plants for centuries. However, his work is certainly impressive and has attracted some attention towards using a design drawn from nature to gather energy more efficiently. As much as it captures power, it also captures the imagination. As impressive as vast solar arrays in the desert are, I would much rather walk through a powerplant forest made of Dwyer’s trees. Not bad for a 13-year old.

It seems we may have gotten ahead of ourselves on this one. A blog called the Capacity Factor presents a compelling, albeit pretty technical, argument that Dwyer’s results may be deeply flawed. You can read it here, and see further comments over on Hacker News.

I have no reason to doubt the validity of the science over on Capacty Factor and other media outlets who ran the original story, such as the Atlantic, are posting links to it as well. However, I do find it a bit odd that the original post has disappeared and seems to be only accessible via Google cache.

If anyone with a greater understanding of electrical engineering and would like to weigh in, I’d be interested to see what you have to say. Lay down your knowledge in the comments, please.