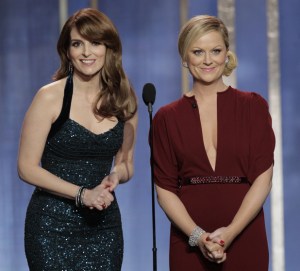 Poehler: [Darth Vader] has two horrible mothers. We know a lot of father stuff with Star Wars, and not a lot of mother stuff. We play these really naggy mothers of Darth Vader.
Fey: [In an elderly New Yorker accent] “Darth, eat! Why don’t you eat?” That kind of stuff.
Poehler: “You’re never gonna find a girl when you go out looking like that!”
Fey: Making him practice his Jedi stuff for hours.
Poehler: Hitting on all his Jedi friends inappropriately. I feel like the theme of the next Star Wars is going to be: How does a working mother juggle it all? I’m looking forward to that. What I like about all these giant superhero movies is that they speak to the issues that I’m dealing with right now — working mother and time management and how to be an interesting, sexual, curious woman in your 40s. That’s the kind of stuff that I like to see on the screen, and that’s what I see with a lot of the films out today.—Tina Fey and Amy Poehler, speaking to Entertainment Weekly about who they’re totally, no joke, playing in Star Wars: Episode VII. That got incisive near the end.

Says the director, “The exciting thing about having Amy and Tina play the Vader Moms, as we’re calling them, is that they bring to the film that pitch-perfect Star Wars energy fans are clamoring for.” As long as they’re allowed to do stuff besides be eye candy, J.J..