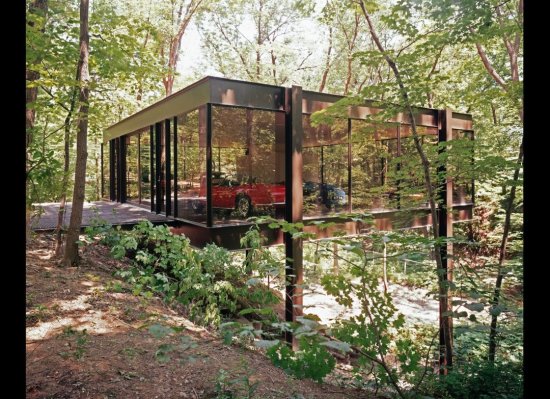 It’s worth pointing out the unusual climax of Ferris Bueller’s Day Off. In any run-of-the-mill movie, this would be when the hero has some significant epiphany and decides to change his life.  Instead, John Hughes offers us a movie where the main character undergoes absolutely no personal change.  He gives us the same catharsis with the hero’s sidekick, when Cameron gets super pissed and accidentally kicks his dad’s vintage Ferrari into one of Highland Park, Illinois’ infamous ravines.

Incidentally, if you’re interested in a bit of hard core mid-century modern architecture and have more than $1.5 million to spare, you could live in Cameron’s house.

The house, complete with an intact glass-walled garage, is now listed in its suburban Chicago neighborhood.  Four bedrooms, three baths, and a large chunk of film history.

But lets face it, most of us don’t have that kind of money.  So here’s a little pick-you-up:

I wonder when thin suspenders are going to come back into style?