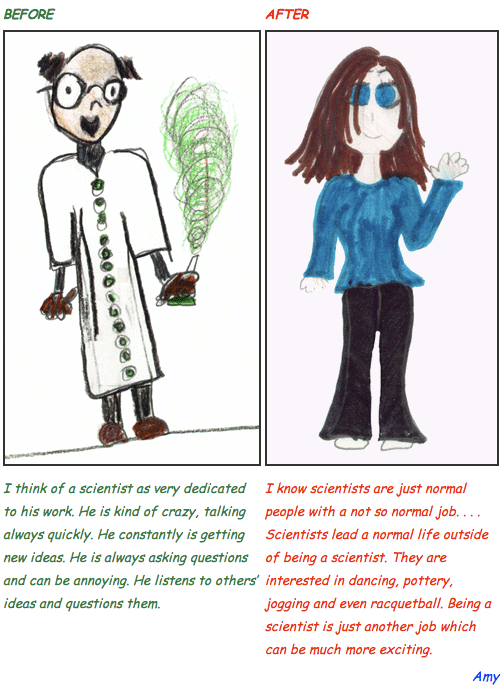 Fermilab’s science education website has the results of an interesting little social experiment in which a class of seventh graders drew pictures of what they thought the typical scientist looks like before their class visited the lab, followed by their impressions of what a scientist looks like thereafter. As the example above shows, students tended to moderate their views and represent scientists are “normal people with a not so normal job.” The students’ “after” pictures showed a lot more women, too — or at least the girls’ did.

Restructure! makes the alarming observation that whereas the number of female scientists in the girls’ ‘after’ drawings shot up significantly from their ‘before’ drawings, 100% of the boys’ before and after drawings depicted males:

If boys grow up to be men, and empirical evidence has no effect on males’ gender stereotypes about scientists, how do we challenge males’ association of science with maleness?

It’s a good question, and Larry Summers-style quips aside, it doesn’t have an easy answer. We can only hope that more female participation in the sciences in the generation to come will help wash away this kind of stereotyping and maybe even change the schema with which we collectively represent scientists. But given that firsthand exposure to a diverse set of real-life scientists at Fermilab didn’t budge (a relatively small sample) of young males’ representations, women in the sciences face an uphill battle.