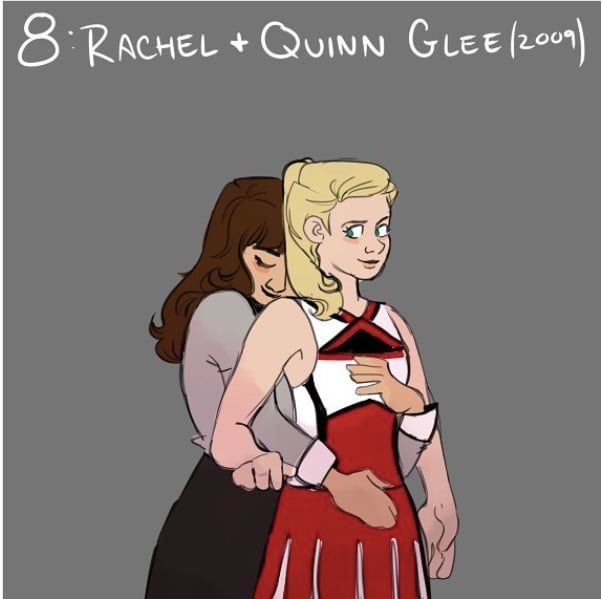 In February, queer-identified visual artist Miranda Britton developed a ten-piece fan art series that imagines what it would be like if two of the female-identified characters in various TV shows had ended up together. Miranda believes her pairings improve the sitcoms by breaking up the monotony of the typical hetero ending we’ve all come to expect.

“I counted and I think you could tell who was going to end up together in the end of the show by the first episode in seven of the ten shows I did,” Miranda explained. “It’s almost always the main guy and the main girl, and they fall in love over the course of approximately five years. And while that’s fun occasionally, it gets repetitive and boring. Having the main girl give up on the guy and turn around to fall in love with her best friend breaks the monotony. Not to mention it turns heteronormativity on its head, which is always fun.”

The series was part of the #femslashfebruary challenge, started by fanfic artist soaringrachel, which tasked artists with creating two pieces of fan work that feature a female/female relationship. “I really liked it because fandom usually focuses on guy/guy couples, so it’s nice to see the ladies being prioritized,” Miranda explained.

My last improved Sitcom for #femslashfebruary is … The Office! I couldn’t bear to break up Jim and Pam, so I just, ya know, fixed them.

She referred to the A03 Ship Stats project, managed by Archive of Our Own, which tracks statistics around fan work. In 2017, the top twenty most popular relationships were all male/male.

The project also tracks the most popular femslash pairings separately. In 2017, the top three femslash couples that inspired the most fan art included Regina Mills and Emma Swan from Once Upon a Time, with over 9,000 fan works, Clarke Griffen and Lexa from The 100, and Laura Hollis and Carmilla Karnstein from Carmilla. 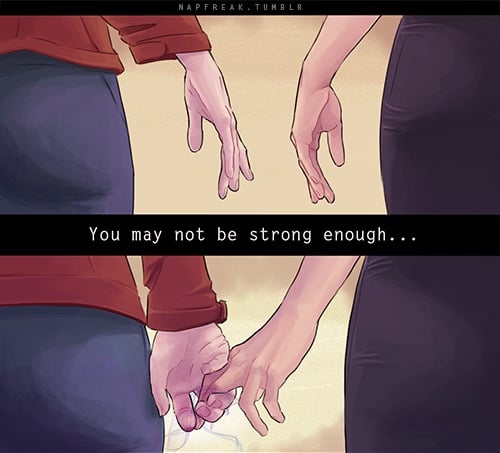 Miranda found out about the Femslash challenge through other fandom artists that she follows. “I wanted to participate because I wanted to have everyone following me get exposed to it the same way I did,” she explained.

While #femslashfebruary challenges the lack of diversity in fandom art, Miranda sees her series as a critique of mainstream media, as well. Sitcoms—especially those we watch growing up—are often seen as a reflection of what everyday life is like, she explained. “So when same-sex couples only appear in speculative fiction, there’s the implication that they’re still somehow abnormal. I think representation in family entertainment really has to be the foundation for changing culture.”

Of the ten pieces she created in February, her personal favorite is The Big Bang Theory with Penny and Amy, for two reasons: “One is because I’m a woman in STEM myself, so it’s a bit of wish fulfillment on my part. Two is because I believe Big Bang Theory is the most watched scripted show on TV right now, so that’s where I think the representation would make the most impact.” 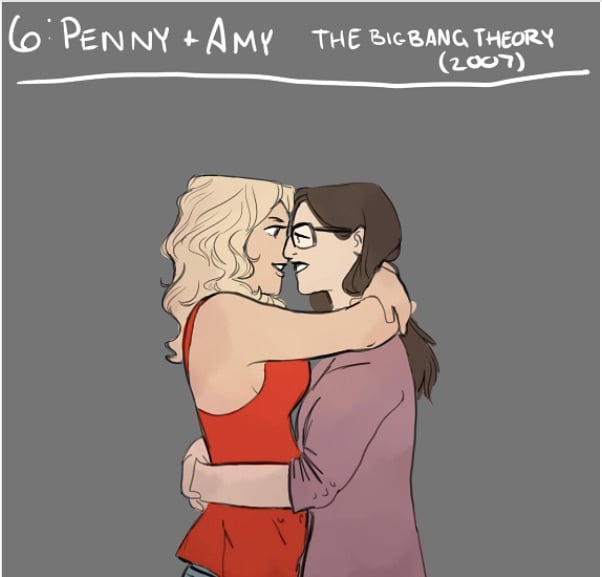 Miranda is currently going to university in Indiana and draws for business and pleasure. You can follow her on Instagram @Mirabrit_art or on Deviantart at mandyjeanb.deviantart.com.

Jera writes about sexuality, spirituality, and social justice around the web and on her blog scarletchurch.com. Her advice column, Just the Tip, challenges mainstream conventions around sex and relationships. Follow her on Twitter or Instagram @thejerabrown.