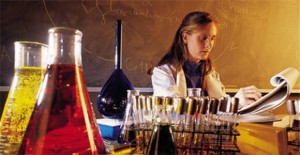 According to a recent University of Massachusetts Amherst study, academic contact with female role models in science, technology, engineering and math (STEM) can “enhance positive attitudes and boost self-confidence among girls and young women.”

For male students in these disciplines, the gender of professors had a negligible effect. The female students, on the other hand, tried harder on difficult tests, identified more strongly with their discipline, and felt more positively about their chosen subject and ability to do well on that path in the future.

The mere extra visibility of female professors in authority positions within STEM fields made the students take more pride in their work and improved their general outlook.

Danielle N. Lee at the Scientific American offers a personal confirmation of the study’s findings:

I can certainly relate to this role model effect as an early career professional. My dissertation advisor was female, as well as nearly half of the other members of the Biology Department. All of them are heavy-hitters in their own right, which made it easier for me to envision myself as a scientist and professor. As I was preparing to apply for postdoc and teaching positions elsewhere, I was reminded to fully appreciate the beauty and support of a gender-balanced science department. The environment I experienced in graduate school is not the norm. However, I still can’t emphasize enough how profoundly powerful it has been to me (and other female students) knowing these women.

She does point out that it’s not helpful to wait around for an “exact prototype” of yourself to inspire you, placing importance on self-motivation. But a similar role model “would have certainly smoothed the way.”