Felicity Jones Will Host SNL in January | The Mary Sue

Felicity Jones Will Host SNL in January! Where Does That Leave Season 42’s Representation? 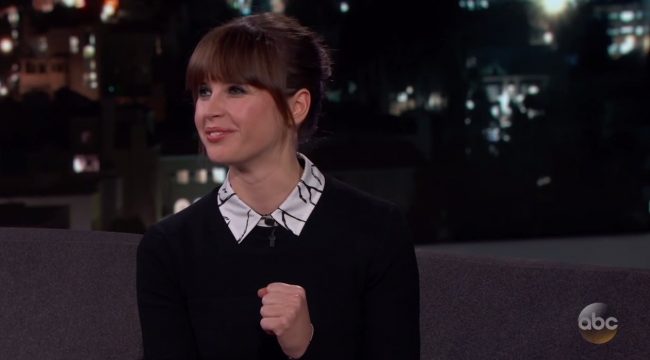 During last night’s Saturday Night Live (SNL) episode, it was announced that Felicity Jones will host SNL on January 14, 2017. Given the box office bonanza surrounding Rogue One, in which Jones stars as protagonist Jyn Erso, it’s inevitable that SNL will launch into some Star Wars skits. Personally, I can’t wait, and I hope that one of them just about breaks the internet the way that Adam Driver’s “Undercover Boss: Starkiller Base” skit did in 2016.  Jones is admittedly better known for dramatic roles, like her Oscar-nominated turn in The Theory of Everything, but I still hope she can get some good laughs.

Excitement for nerd humor aside, where does this leave SNL in terms of representation?

As far as the celebrity guest hosts, this announcement does take Saturday Night Live quite close to gender parity. We’re only about halfway through the season, but the addition of Jones would take the running totals to six men and five women. That’s roughly 45% women so far, and given that 11 is an odd number of episodes, I’ll take it.

Of course, because this is the industry of #OscarsSoWhite, all five of those women–Jones, Emma Stone, Kristen Wiig, Emily Blunt, Margot Robbie–are white. The only people of color who have hosted SNL this season were Lin-Manuel Miranda and Dave Chappelle. So we have to ask: where are the women of color?

In fairness, we are only halfway through the season, which means there are plenty of opportunities left, but last season’s numbers don’t inspire optimism. No women of color hosted SNL in season 41, excepting perhaps Ronda Rousey, who has an Afro-Venezuelan grandfather. (Ariana Grande, though frequently assumed to be Latinx, is actually of Italian descent.) With Hidden Figures on the way, Moana dominating at the box office, and no shortage of diverse TV shows, there are plenty of highly visible women of color who could be invited to host. Your move, SNL.

(Via Deadline, image via screengrab)