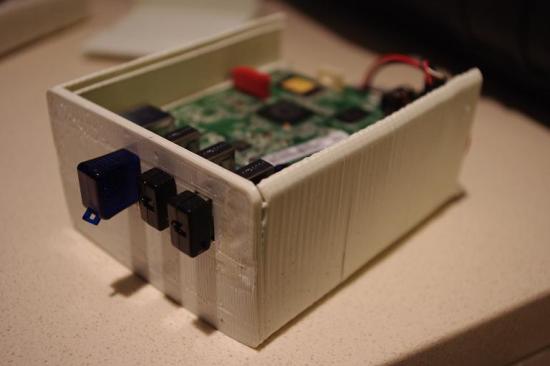 People do a lot of important things on the Internet. Maybe you use it make purchases, and pay bills. Maybe you use it to plot the destruction and overthrow of the government. Either way, you probably aren’t too keen on being spied on. Unfortunately for you, the F-BOMB (Falling or Ballistically-launched Object that Makes Backdoors) makes it easy. Also, it has the sort of pained-acronym name that I can really get behind.

The F-BOMB was made by Brendan O’Connor, a security researcher, and is being funded by DARPA‘s Cyber Fast Track program. It’s a pretty simple — and tiny — rig. At 4 x 3.5 x 1-inches, the F-BOMB is small enough to be secreted away easily; O’Connor has a model that can be easily hidden in a carbon monoxide detector. But its small size doesn’t take away from its functionality. Built with a PogoPlug, 8 gigs of flash memory, a couple of sensors, and a homebrew Linux-based OS, the F-BOMB can make short work of a Wi-Fi security and start sniffing around for interesting information.

Of course, the other really important quality of the F-BOMB is how cheap it is. At around $50 a pop, the F-BOMB is perfect for use as a disposable device. As mentioned in the expanded acronym, the F-BOMB could easily be dropped from a drone or fired from a gun of some sort (in resonably large quantities, as well) in order to snoop on targets in military scenarios as well as domestic ones. Think of it as a sort of Wi-Fi hacking grenade, or mine.

If you didn’t already have enough reasons to worry about the security of your network, this is another one. The F-BOMB isn’t very hard to make or deploy, so your best defense is probably to be as uninteresting as possible. I don’t know if I’d be more afraid to see F-BOMBs in the hands of the government or in the hands of script-kiddies, but either way, I am pretty sure I lead a boring enough life that $50 is $50 too much to pay to get into my Wi-Fi network.