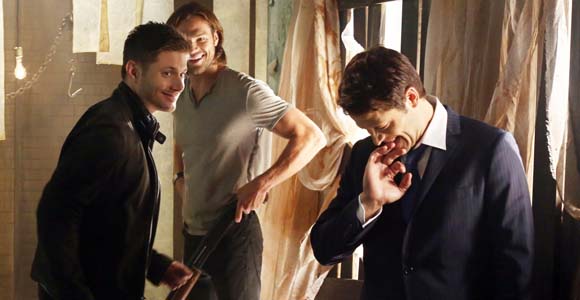 I have a confession to make: When The CW made the announcement it would be renewing Supernatural for its tenth season with no end in sight, I groaned. Audibly. It’s not because I dislike the show. On the contrary, I hold the Winchesters near and dear to my heart. I pause in respectful silence any time I hear “Carry On Wayward Son,” but I’m worried about my beloved series going down in a depressing spiral of mediocre episodes. Nobody wants that.

Sometimes, as fans, we just have to let go.

But can we? When I fall for a television show, I fall hard. Like, Ted Mosby hard. I used to want series to stay around forever and never leave me. If a show was pulled off the air unfairly, like Firefly or Star Wars: The Clone Wars, my heart cracked and I felt personally slighted. Frankly, I still can’t talk about Fox without thinking “you jerks took the sky from me.” I get attached, perhaps unreasonably so.

For me, and maybe for some of you, I think my loyalty and bulldog-like grip stems in part from being a geek and having to defend what I love on a regular basis. I don’t have to do that as much as I did years ago, but I’m always on guard and ready to tell someone how and why Star Wars is so much more than a movie to me.

Those kinds of passionate feelings can lead to loving a franchise blindly, and while deep devotion isn’t bad, it can lead to poor storytelling. If fans will lap up anything and everything regardless of quality, is it fair to expect studios to put in the effort to make it consistently excellent? When I had that realization, I started looking at television differently. And man, it seems like we let less than awesome material drag on and on for the sake of our fandom.

Supernatural is in that category. If they’d have quit after season five, with Sam and Dean going into the pit together, they’d have a darn near perfect television series. But they didn’t. Now there’s “The Time Before Season Five,” and the “Meh Period With a Few Bright Spots After.” How I Met Your Mother is right next to Supernatural. Most of the ninth and final season felt like it was phoned in, and I was only hanging in because darnit, I wanted to know about the mother. I watched each and every episode with optimism, hoping it would be legendary, and kept trucking to the very end.

Seeing stories stretched beyond recognition makes me appreciate and seek out series with shorter seasons and/or a finite plan. Consider Sleepy Hollow. The new show had only 13 episodes in their first season, and that was their decision. They had point A, point B, and a path to get from one side to the other. They didn’t let popularity go to their heads and force their hands to add in a few episodes of filler material just for the sake of doing it.

Battlestar Galactica also had a plan [Editor’s Note: No, not that one.]. The vision may have blurred near the end, but Ronald D. Moore knew he needed four seasons to let the drama unfold. Done and done. Journeys with a destination in mind seem like a better way to go. At the same time, I appreciate how aimless wandering can lead to some gems and other unexpected discoveries. We were never supposed to see Helo again. No one thought Star Trek: The Next Generation’s Chief O’Brien was going to be a breakout character. Wonderful surprises can happen. But exploring without a map also makes it more likely you’ll run into sharks that must be jumped.

At the end of the day it comes to this: How often do shows hit their stride in later seasons? Sometimes they are consistently good, but I can’t recall being blown away by season eight of any given series. Your mileage may differ, and exceptions exist (they always do). For example, Stargate SG-1 exceeded expectations when it revamped the cast after Richard Dean Anderson took more of a background role.

Bringing in Ben Browder and Claudia Black in as fresh faces shook the cast’s dynamic up enough to keep the science fiction series fun and entertaining. They kept the engine running on a car that was getting rusty, but they couldn’t quite restore it to new. The quality and endearing camp of seasons two-five wasn’t rekindled. There were moments, and my favorite episode of the entire series is in season eight (“Threads,” if you’re curious), but by and large, it would have been okay to end the show much sooner.

And because I know someone will bring it up, yes, Doctor Who has been on the air for over 50 years. The stories are still enjoyable, but it’s more about a concept than a particular group of characters. It’s similar to Law & Order in that way. The primary cast changes after a few years and though there are many constants, a certain degree of reinvention happens every time the Doctor regenerates. Most television shows do not have that luxury. They just trudge along.

Now, if I want to make my point about Supernatural, I guess I should stop watching the series. Ratings are still high, but if enough people quit watching, we could make a difference, right? But I won’t. For one thing, I review the series for another outlet. Regardless of that, I tune in because I want to know what happens to the characters I’ve adored for so many years. In a silly way, I feel like I owe it to them. So really, I’m part of the problem.

Amy Ratcliffe is addicted to Star Wars, coffee, and writing. You can follow her on Twitter at @amy_geek and keep up with all things geeky at her blog.