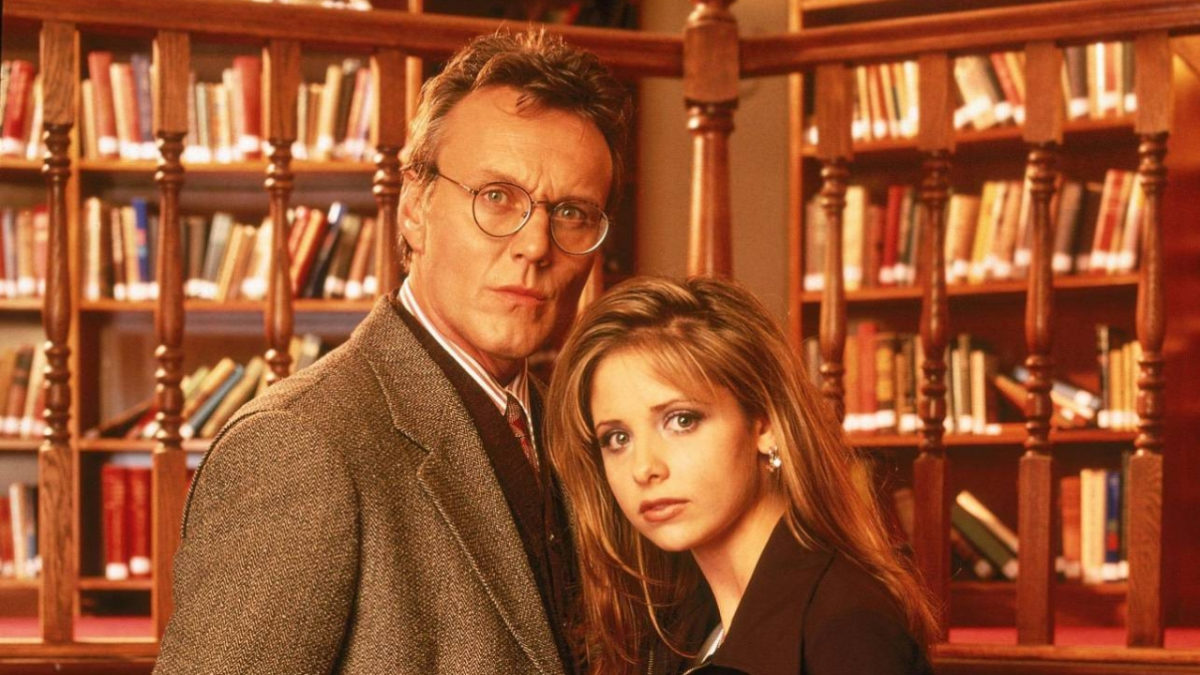 Being a father does not begin and end with conception. While it may be easy to make a baby, being a good dad takes devotion, commitment, and unwavering love. And many of us don’t find that in our biological fathers. If we’re lucky enough, we encounter men in our lives who step into the paternal figure role, who raise us, support us, and guide us towards being the person we become.

In honor of the real dads who stepped in and claimed us as their own, here is a list of our top favorite fictional surrogate father figures. If these folks were real, you can bet we’d be buying them a cheesy tie and a nice steak dinner.

Into every generation, a slayer is born. And with that slayer comes a watcher, who serves to guide and train her through her journey. The first season of Buffy leaned into the inherent odd couple combination of valley girl Buffy (Sarah Michelle Gellar) and fussy Brit Giles (Anthony Stewart Head). But that relationship quickly evolves into one of the most poignant father-daughter stories in television history. Over the course of the series, Giles supports and stands by Buffy, leading to his expulsion from the Watchers’ Council. Buffy’s dad ditched her family before they moved to Sunnydale, and Giles ably steps in to not only parent her, but to be a surrogate dad to the rest of the Scoobies. Giles isn’t afraid to make the tough calls, even leaving Buffy in season six in order to push her to grow. In the iconic musical episode “Once More With Feeling”, he sings “I wish I could play the father, and take you by the hand”. But in so many ways, Giles is Buffy Summers’ spiritual dad.

After the murder of his parents, billionaire orphan Bruce Wayne could have become an embittered villain or a dissolute playboy. Luckily, he was raised by English butler/ex Special Ops agent Alfred Pennyworth, whose love and devotion molded him into one of the most iconic superheroes of all time. Alfred has been a part of the Batverse since 1943, and has been a mainstay in not only the comics, but every film, television, and video game adaptation of Batman. Alfred’s job has been at times doctor, researcher, co-pilot, advisor, confidante, and unwavering moral compass. Quite simply, there’s no Batman without Alfred.

Joe West (Jesse L. Martin) is Barry Allen’s foster father (and future father-in-law), taking in the future Flash after his mother dies. As a single father, he raises Barry and Iris, and calls Barry his son. Joe is a loving and complex father, as seen in his struggles to connect with his estranged son Wally. But he is always there for his children, bringing warmth and conviction to his role in his childrens’ life.

Patrick Stewart’s portrayal of the level-headed, erudite Captain Jean-Luc Picard was a surrogate father to many on the USS Enterprise. Picard was also a different kind of father figure than the ones we were used to. Stewart’s performance as a cultured, well-educated gentleman was a welcome reprieve from the machismo and posturing of many TV dads at the time. Picard was not the kind of surrogate dad who would play catch with you on the holodeck, but he would teach you about Shakespeare and encourage education and understanding. For many nerds, he was the ideal father figure.

Season two of Stranger Things not only expanded the mythology of the smash hit Netflix series, but it gave us one of the most heartwarming father-daughter relationships in Chief Hopper (David Harbour) and Eleven (Millie Bobby Brown). After losing his own daughter, Hopper became a disaffected alcoholic, until Eleven entered his life. Knowing only the cold sterility of a lab and the nightmarish world of the Upside Down, Eleven has never known parental love. Both characters are emotionally damaged, but manage to find their way into a loving relationship. While Hopper can be credited with saving and protecting Eleven, it’s really Eleven who saves him.

Kara Zor-El lost her father on Krypton, and was raised on Earth by her foster father Jeremiah Danvers (Dean Cain). But it’s J’onn J’onzz (David Harewood) who steps in as a spiritual father to both Kara and Alex. The Martian Manhunter takes both Danvers sisters under his wing, first as the head of the DEO and then as their trusted friend and confidante. J’onn is always there to offer measured advice and centuries of wisdom. Despite losing his family during the Martian exctinction, he has comes to see Alex and Kara as his own daughters, is an integral member of the Supergirl family unit.

Comic books are filled with surrogate father figures, but one of our favorites has to be Ben Parker, who took in a young Peter Parker after his parents died. Uncle Ben and Aunt May are a huge influence in Peter’s life, but it is Uncle Ben’s death that is a defining moment in Peter’s journey, pushing him to embrace his powers for good. Uncle Ben also gives us the ultimate superhero mandate: “with great power comes great responsibility.” It’s not only a guiding principle in Spider-Man’s life, but one that guides countless heroes in their quests.

Who are your favorite surrogate father figures in pop culture? Share your faves in the comments!