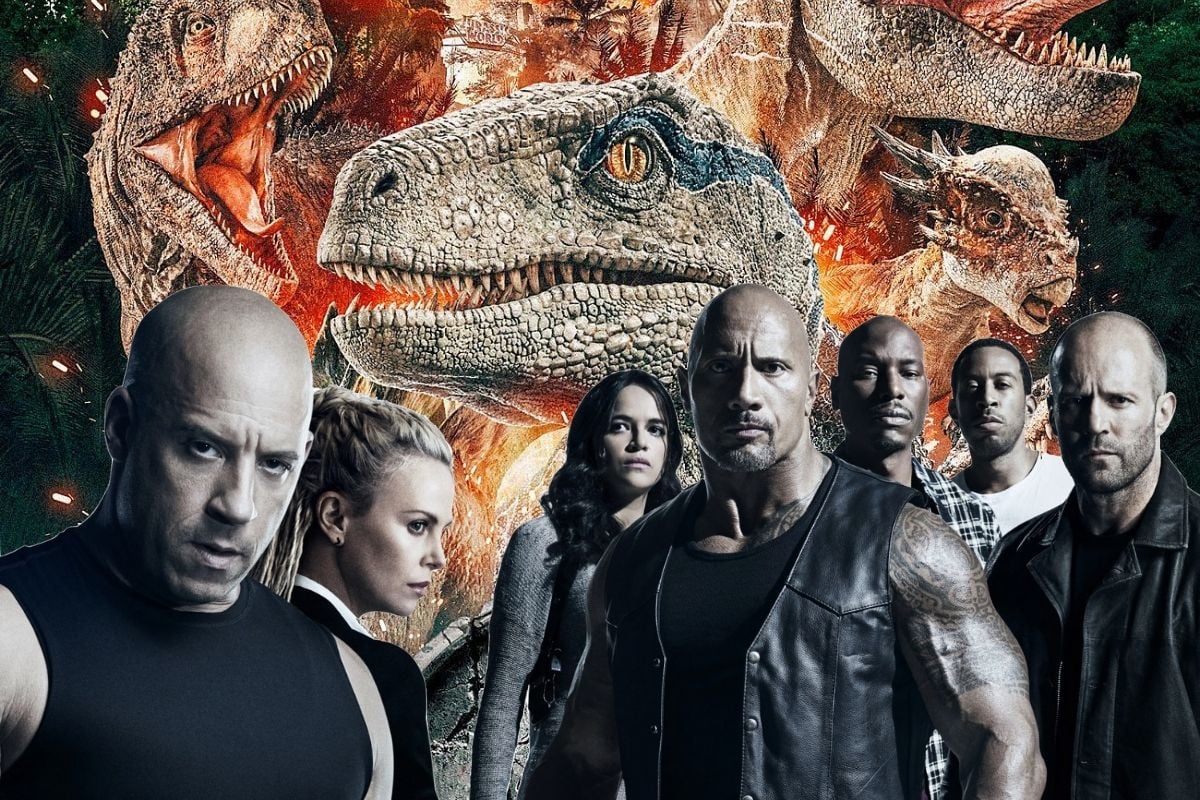 With every Fast & Furious movie that’s released, I wonder if this franchise has reached its limits. Surely there’s nothing wilder than driving a car between buildings? Or flying through the air to save your bae after she gets tossed from a tank? And every time, I get proven wrong. Fast & Furious has no limits, and according to director Justin Lin, the same thing could be said about a crossover with Jurassic World.

Yes, you read that right. Dinosaurs and cars, the ultimate combo.

The question came up during a virtual F9 press conference where Lin responded to a question about a possible franchise crossover by saying, “Well, I’ve never said never to anything.” He followed that with, “And the fact that part of our philosophy is not to ever be boxed in or labeled. And that’s all I will say.”

That isn’t a no, Fast & Furious and Jurassic World fans! That’s a confirmation that this franchise will push boundaries as long as Vin Diesel, Michelle Rodriguez (who was up for the crossover too), and the rest of the Fast & Furious team want to. And personally, I’m here for it and for however many movies this franchise can give me.

The Fast & Furious team is learning how to make cars fly in F9 and possibly going to space. The sky isn’t the limit anymore, and racing cars against dinosaurs could totally be a possibility, especially with both franchises calling Universal Studios home. Also, you know that they would find ways to use the cars as flying battering rams to take down the big dinos. Cuz fast cars.

That’s why we’re here and why we’ve put together a list of 5 ways a Fast & Furious and Jurassic World crossover can happen!

Note: Most scenarios are based after the events of Jurassic World: Fallen Kingdom—a very important distinction for this very serious list.

1. Dom has another secret brother

I know, it’s not original. But if Dom has one brother doing nefarious things in F9, who’s to say he doesn’t have another one that has been living in the shadow of both of his brothers? And now that mysterious brother #2 has a chance to show up his brothers via dinosaurs. Include a shady government organization trying to make more dinosaurs with the secret brother’s support, and you’ve got a recipe for disaster or greatness. It can only be one.

2. The team has been hired to make faster cars cuz dinosaurs

With dinosaurs roaming wild and free, Dom and the team have been hired by a wealthy corporation to make fast cars. Instead of letting such a job fall into hands they don’t trust, they agree to work with this corporation. This leads to daredevil speed tests where a dinosaur comes up against a car in a ridiculous scene that will make Dom rescuing Letty after the tank scene in Fast & Furious 6 look like child’s play.

3. They return from space to find dinosaurs terrorizing the country

From what I could tell from the F9 trailer, there’s going to be some sort of space travel. It might not be in the vast nothingness of space, but it’ll be close enough. Well, what if after that, when the dust has settled, they come to the startling realization that their country has been overrun by dinosaurs! With their family in danger cuz dinosaur reasons, Dom and the gang team up once more to reunite their family and end up killing dinosaurs by flinging cars at them.

4. The team is attacked at home by dinosaurs

Dom, Letty, and their kids are living in the middle of nowhere for safety reasons, celebrating the reunion of their family. Little do they know that the McMansion that freed those dinosaurs in Jurassic World: Fallen Kingdom is close by. You know who’s also close by? The bad guys, a.k.a. Cipher! But with dinosaurs surrounding them, they’ll have to team up with the Fast & Furious team to survive. Expect random household items taking dinos down cuz science.

5. An AU of Jurassic World and Fast & Furious

What if the Fast & Furious team went to Jurassic World before the escape of Indominus rex? And by before, I mean they arrive on the island the same day things go haywire. And it’s up to them to team up with Owen and Claire to protect the people on the island and find their family members because, of course, they somehow find themselves split up. Did I forget to mention that they somehow supe up those hamster balls and use it to escape dinosaurs? Yup.

These are just a few of the possibilities, which are truly limitless if the Fast & Furious movie series has taught us anything.