New Farscape Movie, Sci-Fi Show For Peter Dinklage Are In the Works 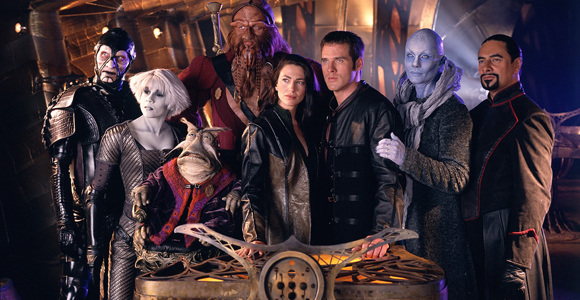 An article on if.com.au broke the Meh, no big news that Farscape writer/co-executive producer Justin Monjo is writing a movie spin-off of his cult classic sci-fi show. Oh, and he’s also working on a sci-fi pilot called The Beasts of Valhalla for HBO, and Peter Dinklage is in talks to star.

You know. Boring stuff like that. Who cares about a Farscape sequel? I’m kidding, please don’t kill me.

First, to Farscape. Via if:

In the finale, the protagonists, American astronaut John Crichton (Ben Browder) and peacekeeper Aeryn Sun (Claudia Black) got married and had a baby. In the movie, it’s revealed the boy had special powers which made him the target of the villainous aliens so his parents hide him on Earth.

The plot follows the kid at the age of 19 when his whereabouts have been discovered and he rejoins his parents on their spaceship.

If that happens we’re looking at the return of Crichton and Sun, which should get Farscape fans nice ‘n’ happy. Note that I said “if”: Monjo writing the movie (likely to be a TV movie, I’d wager) is a far different thing than said movie getting a green light and being produced. We haven’t approached Serenity territory quite yet.

And, I’m sorry to be a downer, but we need to keep a similar level of skepticism for The Beasts Of Valhalla, the HBO show Monjo is developing. It’s based on a series of novels by George C. Chesbro and is what Monjo describes as “grounded sci-fi.” Dinklage would play a dwarf detective/NYU criminology professor called Mongo the Magnificent, real name Dr. Robert Frederickson. The Mongo Series, of which The Beasts of Valhalla is the fourth book, takes place in something like the real world, but with genre elements like warlocks and genetically-mutated monsters.

“HBO and Red Hour [Films, which is producing] think he’s the perfect guy for the part and are very excited about the project” says Monjo, who according to the is article is flying to New York next month to meet with Dinklage and beg him to take the role talk to him about the project. Since Tyrion Lannister comes first, the idea is that The Beasts Of Valhalla would be shot as a “post-Game Of Thrones gig for Dinklage after 2016.”

If this ends up happening, Dinklage would go right from filming the final season of Game of Thrones—number seven, according to producer Frank Doelger—to doing this new show. We’d be looking at a gap of approximately zero of Dinklage on our TV/computer screens. Again, this project could linger in development hell and die a quiet death. Or maybe Dinklage won’t even want to do it. Guy will deserve a break post-Game of Thrones, after all.

So both of these could happen, or neither. Or just one. If you had superpowers and could guarantee that one of these projects, but only one, would happen (The Beasts of Valhalla with Dinklage), what would be your call?