Gary Larson to the Internet: Please Create Your Own Anthropomorphic Comedy Scenarios 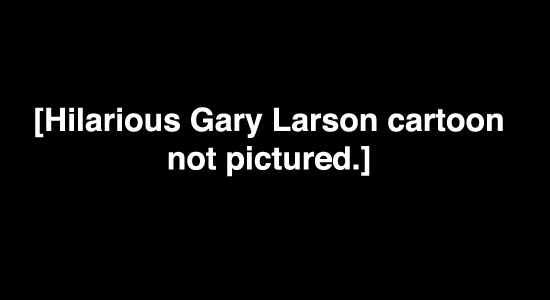 In a note published on Creator’s Syndicate, cartoonist Gary Larson is politely asking his fans to stop using images of “The Far Side” online. He writes:

These cartoons are my “children,” of sorts, and like a parent, I’m concerned about where they go at night without telling me. And, seeing them at someone’s web site is like getting the call at 2:00 a.m. that goes, “Uh, Dad, you’re not going to like this much, but guess where I am.”

While certainly not angry in his tone, maybe even a little reluctant to have to say something at all, it’s easy to see why Larson is finally warning people who use his work without authorization.

He describes a conversation with fellow cartoonist Richard Guindon that revolved around asking each other for ideas on their work. Guindon agreed with Larson that they didn’t do that because “It’s like having someone else write in your diary.” Any creative output does come from a very personal place, and when it’s co-opted by someone else without your permission, it’s logical to wonder what it’s being used for. If someone misunderstood the intent of the creator and used their material out of context, it could make the creator look bad. Sometimes, the intent is pure and a fan just loves a particular “Far Side” panel. But sometimes, people want to change the color and turn one of Larson’s cows into Snooki. And Gary Larson wants no part of that. Understandably so.

My effort here is to try and speak to the intangible impact, the emotional cost to me, personally, of seeing my work collected, digitized, and offered up in cyberspace beyond my control.

Is it annoying when we can’t embed a video from YouTube because the user didn’t want to risk their images ending up where they didn’t intend them to be? Yes, but as the audience, we should respect the person who made the effort to entertain us.