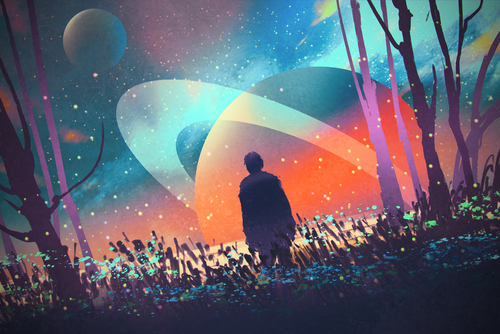 We all live rich, complicated lives. And yet many of us have a tendency to think of things outside ourselves in the binary of this or that, yes or no, good or bad, right or wrong, male or female, gay or straight. It keeps life simple, and gives us a feeling of safety and security that the world is—if not likable—at least understandable. Most of the time, reality seems to square with this mode of thinking because on average, most things are close enough to seem like they fit in one category or the other. But every once in a while, life throws you something that simply won’t work within that reductive, binary thinking. Those moments can be disorienting, upsetting, and at times even frightening.

There have been many moments in my life where I was forced to confront the fact that life is not as simple as “this or that”. When my ex-wife, and mother of my children, fell in love with and married a woman, I sent an emotional and perhaps somewhat hysterical email to a lesbian friend of mine asking if it meant that my ex, with whom I’d had a nine year relationship, had never truly loved me. Sure, the marriage had ended, but I’d always thought there had been a lot of good times. Above all, I’d thought it had been real. But had it all been a lie? A fake out?

That was when my friend, who is as levelheaded as she is kind, gently explained the concept of fluidity to me. It is this idea that there may be times in our lives when we fit into the neat binary categories of straight or gay or bi, but that ultimately, the nature of life is to change. To slowly grow and mature, then just as slowly (if we’re lucky) decline. We accept that this happens to us physically, so why not in other aspects of ourselves? I am not the person I was twenty years ago. None of us are. We don’t even have the same cells in our bodies. Why would we think that there are fixed points in ourselves, some unchangeable elements, when nothing in the entirety of existence suggests that is true?

Look, I know. It’s not easy to step outside the construct we’ve grown up with our whole lives and see things differently. And that, my friends, is where the monsters and magic come to our aid! Our fantasy worlds can be anything we want. All our dreams manifest. If we can imagine flying dragons and elves, why not a third gender, or a fourth, or a whole spectrum of gender? If we can imagine someone with the ability to move things with their mind, why not someone who’s mind works completely differently from our own, and that’s it ok and doesn’t need a “cure”? Fantasy opens the doors to possibilities so wide they are nearly endless. It offers an excellent opportunity for an author to ask, “Is this particular social construct necessary for my story? Or is it actually holding it back?”

I experiment with concepts of gender a fair amount in my Empire of Storms trilogy. One of the two main protagonists, Red, is a charming, roguish thief. And while he is a man, he is not what you would call stereotypically “manly” or “macho”. He is thoughtful, sensitive, emotional, and creative. He was raised primarily by a woman, most of his friends are women, and his one close male friend is gay. When I described this character to one of my few male friends, a man who is also gay, he rolled his eyes and said, “Write what you know, huh, Jonny?” And he’s absolutely correct. Red is, in part, my attempt to embrace and celebrate my own somewhat unconventional masculinity. To imagine it as something cool, when for most of my life I have been told by other men that it is not.

That is a fairly subtle example, I suppose. Perhaps a more pronounced one would be the character of Brigga Lin. Although her name doesn’t appear in the title of either Hope and Red or Bane and Shadow, I’ve always thought of her as the unofficial third protagonist, mainly because from the first moment she hit the page, she has been such an endless joy to write. In Hope and Red, she magically changes her body from male to female. While it’s true she has a specific goal in mind when doing so, there were other ways she could have attained that goal. Ways that would have been easier, and far less physically painful (side note: my editor dubbed this “the exploding penis scene”). Her ultimate goal is power, and as many transgender folk will tell you, there’s a whole lot of power to be found in truly understanding and accepting yourself. I would suggest that it is this self-acceptance, even more than the magical power she gains, that makes her such a force to be reckoned with throughout the trilogy. She is not perfect. None of us are. But she is damn cool. And I’d like to think that if you are someone who is not accustomed to hanging out with transgender folk, then maybe as you get to know and like Brigga Lin—perhaps even love her, as I do—it might give you some practice in imagining having a transgender person in your own life.

Because while fantasy can be reductive and polarizing, with good versus evil cliches, it can just as easily show a world that is rich and complex and messy, and all the more beautiful for that. Once we imagine something outside our own experience, our brain can begin to process it. We can work out our fears and misgivings toward these unfamiliar elements to make them not only accessible, but relatable. And maybe even cool.

Jon Skovron is the author of several young adult novels and his short stories have appeared in publications such as ChiZine and Baen’s Universe. He is the author of the Empire of Storms series of books from Orbit: HOPE AND RED, BANE AND SHADOW, and the forthcoming BLOOD AND TEMPEST (Fall 2017). He lives just outside Washington, D.C. with his two sons and two cats.