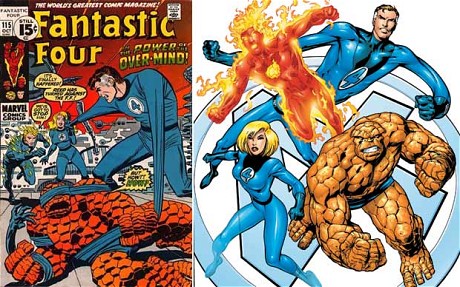 Marvel has announced that it will be killing off a member of the Fantastic Four in next month’s issue, number 587, and that this time, they’re not promising a comeback.

In a story arc entitled “Fear Itself,” the Fantastic Four – Human Torch, Mr. Fantastic, Invisible Woman, and the Thing – have been placed in life-threatening situations, and executive editor Tom Brevoort says, “I think we’ve given plenty of hints as to who may die – perhaps too many.”

While members of the Fantastic Four have died and come back before (such as Sue Storm/Invisible Woman and Reed Richards/Mr. Fantastic), this announcement is making it sound like they’re really not kidding this time. Someone is going to actually, permanently die, and as of issue 588, “the Fantastic Four will cease to exist.” Though some comic book fans are less than convinced that such a lasting change is going to occur.

The highly secretive issue, to be released in January, will be wrapped in black plastic preventing anyone from leaking the story without making a purchase. It will also not be sold on newsstands.

According to David Gabriel, senior vice president for sales and circulation at Marvel, “The surprises in this issue – and what comes next – constitute one of the biggest events in Marvel history.”

Fun fact: The Fantastic Four was created in 1961, possibly over a round of golf.

(via The Telegraph, via AP)