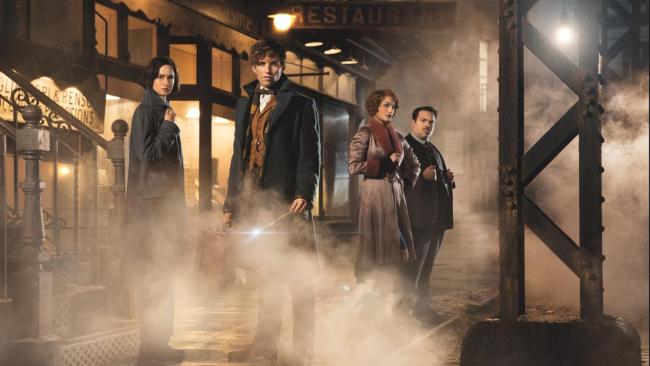 Principal photography for the second installment of the five-film franchise Fantastic Beasts begins today, where we’re going to see some familiar and new faces. Once again directed by David Yates, the film takes place a few months after the events of the first film, with Gellert Grindelwald on the loose.

It should be obvious, but these are definitely spoilers for the second Fantastic Beasts film.

While Newt Scamander (Eddie Redmayne) seemingly left them behind in the first film, Tina Goldstein (Katherine Waterson), Queenie Goldstein (Alison Sudol), and Jacob Kowalski (Dan Fogler) will be making a return. Their group dynamic was one of my favorite parts of the first, and hearing that Jacob and Queenie will be reunited will no doubt bring tears to my eyes. Unlike the first film which stays in New York, the film will take our faves to London and Paris as well, with lots of Easter eggs along the way.

As we’re heard, young(er) Dumbledore as played by Jude Law will finally appear and his tumultuous and conflicted relationship with Grindelwald will hopefully be more than subtext. However, the fact that the franchise has cast alleged abuser Johnny Depp in the role of the Dark wizard casts a huge downer and unpleasantness to the entire project. Seriously, just bring back Colin Farrell.

Otherwise, pre-headmaster Albus Dumbledore (as well as teenaged Dumbledore) will give Harry Potter fans an chance to get to know a new side of the wise mentor. It’ll be interesting to see how this might change of inform the way we look at his Harry Potter years.

In significantly more exciting casting news, Ezra Miller will be back at Credence, though the details of that returns are foggy. The inimitable Zoë Kravitz will play Leta Lestrange, one of Newt’s close friends from Hogwarts whose name alludes to some dark ancestry, and Callum Turner will play Newt’s brother Theseus Scamander, “a war hero and Auror.”

I’ve been excited to see Turner in more roles since Tramps, and the hero brother/nerd brother dynamic is always one I can appreciate. How do you name one of your sons Theseus, and then the other one Newt? As always, J.K. Rowling stays on-the-nose with her name choices.

Claudia Kim (Age of Ultron, The Dark Tower) will play a young woman in a wizarding circus, and oh my gosh you guys wizarding circus. We’ll likely encounter lots of fantastic beasts and unusual wizards there. Ólafur Darri Ólafsson will also be there as Skender, the man who runs the wizarding circus. Wizard circus!

Other appearances include William Nadylam as a wizard named Yusuf Kama, Ingvar Sigurdsson as a bounty hunter named Grimmson, and Kevin Guthrie as Abernathy, Tina and Queenie’s boss at MACUSA (Magical Congress of the USA). I felt like the politics of the American wizarding world could have been better in the first film as the discrimination metaphor and incompetence of the leaders felt weak, but hopefully things will change now that our leads have somewhat proved them wrong.

Anyway, those are a lot of details! What are you looking forward to seeing the most? (The correct answer is wizard circus.)