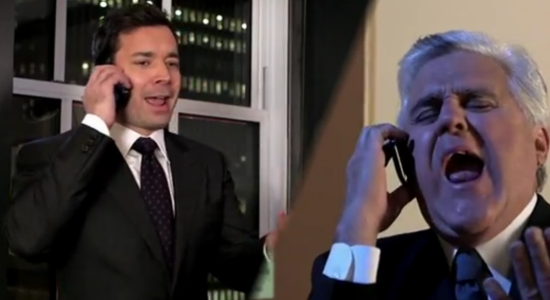 It’s as official as it’s going to get: Jay Leno is stepping down from The Tonight Show again and Jimmy Fallon will be replacing him, though we’ve all been here before. The switch is expected to happen during NBC’s coverage of the Winter Olympics next year, and will bring The Tonight Show back to New York City under Lorne Michaels as Executive Producer. Will it all go down smoothly, or are we in for another round of late night wars?

There’s still nearly a year before Leno is expected to step down for things to go south, but it looks like everyone is happy with the deal. Leno himself congratulated Fallon saying, “I hope you’re as lucky as me and hold on to the job until you’re the old guy. If you need me, I’ll be at the garage.”

Fallon said, “I’m really excited to host a show that starts today instead of tomorrow,” making reference to Late Night’s 12:35am start time.

In recent days Leno and Fallon have each joked about the situation on their respective shows and even did this duet sketch about the speculation:

Besides the seven months when Conan O’Brien took over, Leno has hosted The Tonight Show since 1992 when he took over as the fifth host after Johnny Carson left the show. It was Carson who moved the show from its original home in New York to Los Angeles.

Although there is no official word from NBC over who will replace Fallon as the host of Late Night, The Hollywood Reporter is saying Saturday Night Live’s Seth Meyers is the likely choice.

As a fan of late night television, this news all sounds wonderful. Fallon is the best talk show host out there. It makes sense for him to be behind the desk of that genre’s flagship show, and I love the idea of Seth Meyers hosting Late Night.