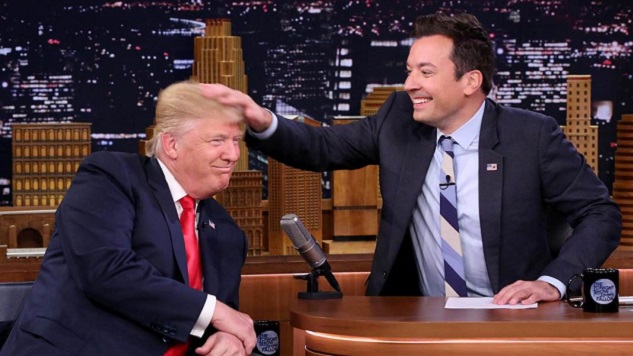 You know the moment we’re going to talk about here: when Jimmy Fallon ruffled Donald Trump’s hair and instantaneously cemented his place as an enabler of this whole mess. That was a long time ago now—and feels even longer—but there’s a rare news profile today (from the New York Times) that isn’t about what specific variety of “anxiety” drove a Trump supporter to vote for that man. No, it’s about the real victim of Donald Trump’s rise: Jimmy Fallon.

Not that the current political moment hasn’t been bad for Fallon. Criticism of Fallon’s late night hosting skills have often pointed to his shows, both Late Night and now The Tonight Show, being light on substance and heavy on celebrities doing goofy things. The way things have been going lately, there’s definitely a desire for more comedy with a stronger viewpoint on the world, and that certainly has left Fallon at a bit of a disadvantage as Stephen Colbert finally overcame their sizable ratings gap.

But that’s all relative, and it’s incredibly difficult to feel bad for Fallon, considering the massive platform he has to say whatever he wants to the world. He told the Times, ““I don’t want to be bullied into not being me, and not doing what I think is funny,” he said more defiantly. “Just because some people bash me on Twitter, it’s not going to change my humor or my show,” but no one’s asking for him to turn his entire show toward—except maybe executives at NBC, for all I know. There’s just plenty of room for a happy medium between that extreme and actively trying to be apolitical to the point that you might actually be doing harm.

There’s also something to be said for providing an accurate view of the world rather than trying to achieve some kind of false balance between two sides that aren’t equal—something everyone in the media struggles with on a daily basis. Years before we even knew any of this would happen, the BBC tried to teach its reporters not to make false “both sides of the issue” equivalences, because that’s not something we just invented because we don’t like Donald Trump. Objective reality is never going to line up with the midway point between two political philosophies. In many cases, right and wrong exist. A platform like The Tonight Show has the ability to shape people’s view of where the “center” actually is, and that shouldn’t be taken lightly. It’s just as political to falsely put two unequal “sides” on equal footing as to give too much credit to the one you already favor, even if it’s unintentional.

Fallon seems to be saying it was. He also told the Times, “I didn’t [ruffle Trump’s hair] to humanize him. I almost did it to minimize him. I didn’t think that would be a compliment: ‘He did the thing that we all wanted to do.'” At the time, that’s what I had assumed—that it was meant to follow in line with the storied history of mean-spirited jokes about Trump’s hair—but whether due to some super strength hair gel preventing the hair from getting messed up enough to drive the joke home, or due to Fallon’s demeanor not really coming across like he intended it to be a pointed moment, or due to the humanizing tone of the interview that preceded it, it certainly didn’t come off that way.

It’s especially difficult to feel bad for him, despite his assurance of, “If I let anyone down, it hurt my feelings that they didn’t like it. I got it,” because some of his reluctance to express an even modestly stronger point of view seems to be out of a fear that some people won’t like him—namely Trump voters, who he pointed out also watch The Tonight Show. “I’m a people pleaser,” he told the Times. “If there’s one bad thing on Twitter about me, it will make me upset. So, after this happened, I was devastated. I didn’t mean anything by it. I was just trying to have fun.”

Yeah, getting political is hard. Some people won’t like you. Some people will like you, and then you’ll f*ck up, and they won’t like you anymore, or at least maybe they’ll think a little less of you. That happened to Stephen Colbert recently. It happens to us, around here, all the time. (And we’re always trying to do better!)

But that’s a choice we all make, and just like you really can’t be truly apolitical, it’s not a choice between alienating people and making everyone like you. There’s no scenario under which everyone likes you. You just have to choose which people you’re willing to alienate, and though that choice is yours to make, you also have to live with the message it sends. It’s easier to understand someone less privileged than Fallon choosing the path of least resistance, but he has the opportunity to do more than that and is consciously turning it down. He’s clearly decided that he’s more concerned about staying in the good graces of Trump supporters than of those who’d vocally criticize them, and as long as that’s how he feels, some of that criticism is going to come his way, too.