"Why did the Falcon cross the road? For justice, mother f---er!" 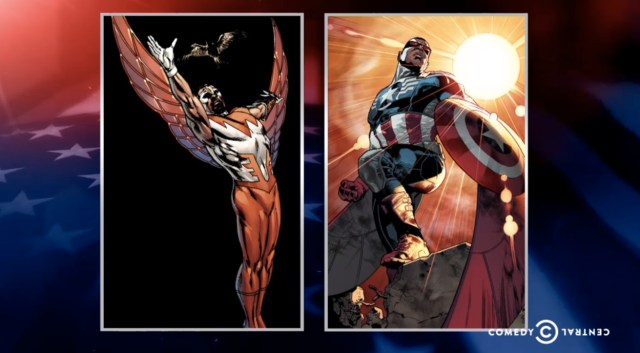 The big Marvel announcements just keep coming. After announcing Thor will be a woman on The View earlier this week, Marvel sent Chief Creative Officer Joe Quesada to The Colbert Report to announce that the Falcon, Sam Wilson, will be taking on the mantle of Captain America.

The change comes after the man most people know as Captain America, Steve Rogers, lost the powers given by the Super Soldier Serum in a fight with Iron Nail. Those powers include the serum’s youth-preserving properties, and Rogers rapidly ages by decades. Wilson will step up to replace Rogers as Captain America, but Quesada assured the audience that it’s just in the comic book universe, so Chris Evans still has a job in the MCU (at least for now).

But if Falcon is taking over as Cap, this leaves a spot open, right? Don’t worry. The Falcon mantle is in good hands: 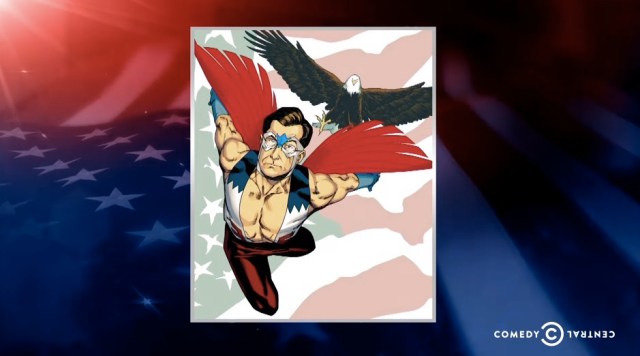 Watch the full announcement from The Colbert Report below.

Given how a lot of jerks reacted to the Thor announcement I’m sure people are going to have lots to say about the change. We’re all pretty excited to see the changes Marvel’s been making to put better representation in comics. Tell us what you think in the comments.

[Update] Anyone wondering what Steve Rogers’ future will look like, we have an update from a Marvel press release. Executive Editor Tom Brevoort says,

Steve’s spirit is as willing as ever, but his body is no longer up to the task of being Captain America. So he’ll employ his skills as the new Cap’s remote strategic advisor, running Cap’s missions from his headquarters in Avengers Mansion and providing Sam with technical support and field information from a distance. He’ll also tutor Sam in how to throw the shield, a skill that’s deceptively difficult for the new Cap to master. So Steve will continue to be a vital part of the series moving ahead.

(via The Colbert Report)