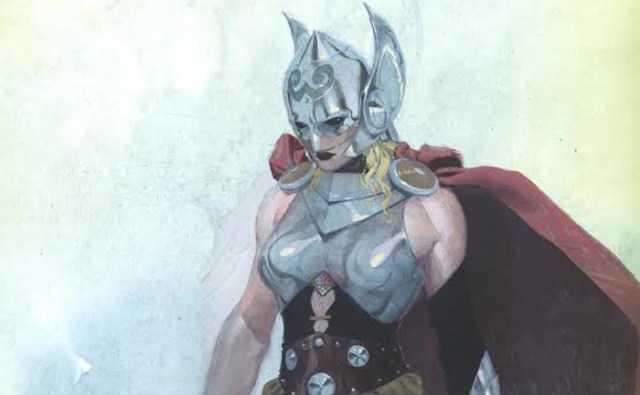 Yesterday we heard a surprising revelation on The View—a woman would be taking the place of Marvel’s Thor and using his name. But what does it all mean? Some new interviews with the creative team give us a few more clues.

The reaction to this new, as yet unnamed, Thor was swift and divisive. Some fans were thrilled about the move (shameless plug, I was quoted in the NY Daily News today about new!Thor), while others were disappointed this new female character wasn’t getting her own moniker. Of course, there was plain old rage to be had as well. Marvel Executive Editor Ryan Penagos had this to say:

.@Marvel executive editor @AgentM responds perfectly to nerd rage over news that Thor will be a woman: pic.twitter.com/IBiPiqAiEJ

The comic book, debuting in October, is being written by Jason Aaron with art from Russell Dauterman and Time.com spoke with a few folks involved at Marvel about the news.

TIME: Why make Thor a woman instead of creating a whole new female character in the series?

Wil Moss, Marvel Comics editor of the upcoming Thor series: We can’t give away all the story details now obviously, but once the story is out there, it becomes clear why there’s a new female Thor. It’s not about filling a certain quota. It’s about providing a shot in the arm to the Thor titles definitely, but it’s something that’s a natural part of where this story and the Thor title is going.

Axel Alonso, Marvel’s Editor-in-Chief: She wields the hammer because Thor can’t. This is different because for reasons we can’t disclose quite yet, Thor is unable to pick up the hammer. There are a number of women in Thor’s life, and we’re going to tease out for quite awhile the identity of who this woman is. But one of the women in Thor’s life picks up the hammer. She is in fact worthy. And she becomes Thor.

There’s only one Thor in the Marvel Universe. The character we know as Thor will not refer to himself as Thor anymore.

I knew when I took over Thor that at some point I wanted to do a Beta Ray Bill-style story about somebody else wielding the hammer for awhile. It took me awhile to figure out what kind of story that should be and who the character should be.  When you look back over the history of Thor comics, a lot of different people have picked up the hammer at one point or another and hardly any of them female. The only women to wield the hammer are in brief moments here and there, or “What If?” stories, or future stories and stuff like that. So we’ve never seen a big story about a woman picking up the hammer and if you look at the inscription on the hammer it even says, “Whosoever holds this hammer, if he be worthy, shall possess the power of Thor.” I’m going to flip that on its ear and for the first time see what it’s like to have a brand new version of Thor who is female; the Goddess of Thunder.

So that definitely answers a few questions fans had, though they’re still being tight-lipped on plot details, of course. But what of the new readership Marvel is aiming for with this book and others? You may recall this bit from yesterday’s release: “THOR is the latest in the ever-growing and long list of female-centric titles that continues to invite new readers into the Marvel Universe. This female THOR is the 8th title to feature a lead female protagonist and aims to speak directly to an audience that long was not the target for Super Hero comic books in America: women and girls.”

That’s huge. That’s not just targeting the previously ignored demographic, it’s publicly announcing it. Your mileage may vary as to hearing you’re being targeted for marketing, but Sue at DC Women Kicking Ass was particularly excited about it:

Is Marvel actually saying they want female readers? That they are now targeting female readers? Why yes they are. It’s almost worth the amount of trolling, attacks, rape threats and other shit I’ve experienced to see this. Of course, DC Comics also seems to be finally finding the female audience worthy of their attention. Nothing as clear cut as Marvel did above but the recent Batgirl respin and Gotham Academy are clearly going after that audience and I was told by folks close to those books that women are definitely are a target.

Heidi MacDonald at The Beat is also hopeful for what this might mean, but here’s some more words from that Time article:

TIME: There are a lot of female comic fans who are excited about this because they always love to see characters and superheroes who look like them. Is Marvel conscious of trying to engage with its female readership more?

Alonso: Yes, we absolutely are. We see fans of all shapes and sizes and genders in comic stores and at conventions. And we perceived there to be a real thirst for characters that reflect what we see in the mirror. From Miles Morales, the African-American Spider-Man, to the new female Thor, our goal is to make our characters reflect the outside world.

Right now we have eight titles that are anchored by female leads where it’s that character’s name on the masthead. We’re definitely committed to growing that audience.

Aaron also made sure to note, “The story didn’t come about because of any sort of mandate. It’s not like we threw a dart at a board and said we’re going to change this character and make it a female. This was the natural progression of the story I was telling and that’s been building in Thor history for decades now.”