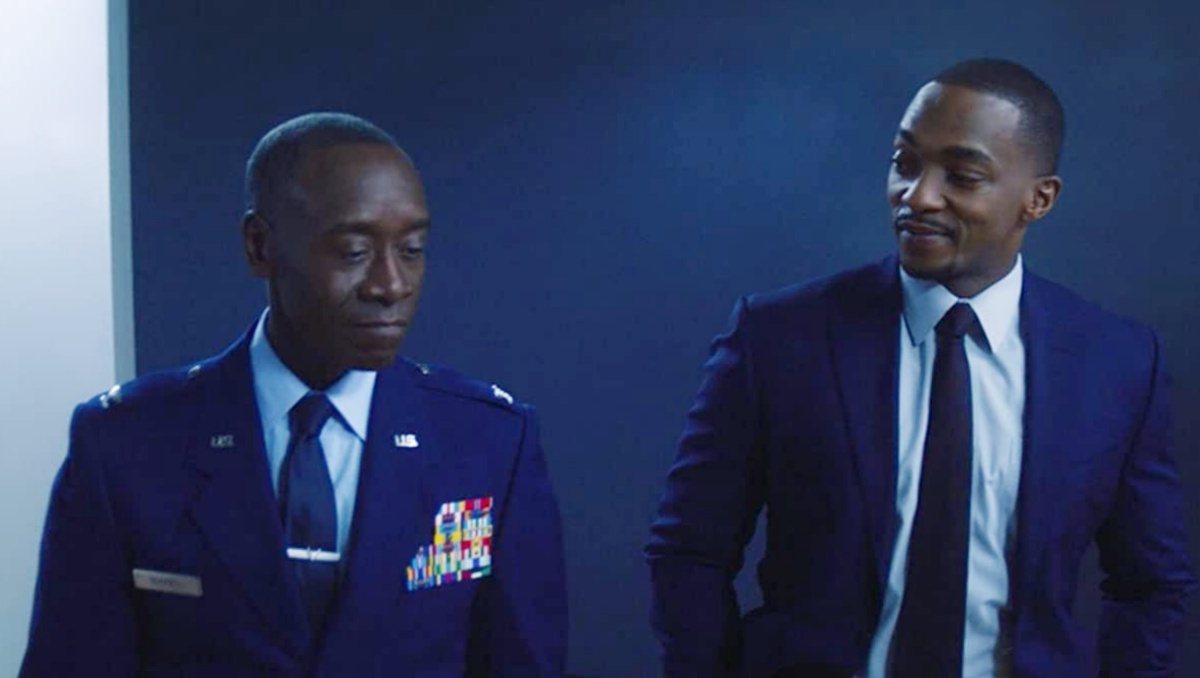 WandaVision delved deep into the psyche of Wanda Maximoff, and The Falcon and the Winter Soldier is examining the racial realities of Sam Wilson and the PTSD of Bucky Barnes. Both are still being developed, but the second episode has leaned very heavily on that first theme.

**Spoilers for episode two of “The Falcon and the Winter Solider.”**

We knew from the beginning that this show would touch on race. How could it not? Falcon, in the comics, was the first African-American superhero in mainstream comic books and became Captain America in the Marvel comic universe back in 2014. Throughout his appearances in comics, race has always been a part of his story.

Anthony Mackie, who plays Sam, has said, “Sam considers the shield a representation of the country that we live in. There’s a lot of trepidation as far as how does a Black man represent a country that does not represent him?”

Malcolm Spellman, creator and showrunner, also said of Sam’s character: “He truly believes that there’s an argument to be made that red, white and blue—stars and stripes—inherently represents oppression.”

That hasn’t truly been explored yet, but it has been bubbling under the surface. In the first episode, when Sam is attempting to get a loan from a bank with his sister, the teller makes microagressive comments while simultaneously fanboying Sam for being an Avenger. During the second episode, Sam is profiled by the Baltimore police, the same police responsible for the death of Freddie Gray, which is again only subdued when they realize he’s an Avenger.

When the diet new Captain America, John Walker, shows up (complete with his own Black friend*) earlier in the episode and calls Sam and Bucky “wingmen” for Steve Rogers, it is clear that Falcon, despite his heroism, is still reduced to a sidekick.

But the real kicker of the episode is when, as I had theorized, Carl Lumbly plays Isaiah Bradley in the show. Bradley was the Black Captain America, a super solider put under torture to become one, only to be tossed aside. Sam is horrified that he never knew about it, when Bucky introduces them. I am hoping that the introduction of Bradley, especially played by The Carl Lumbly, means we get to tackle these larger issues. Just like with WandaVision, there is no way to neatly wrap these things in a bow, so I’m hoping that the show will commit to tell a smart, insular story, even if it becomes a big brawl at the end.

Nuance along the way is really as far as I allow myself to dream when it comes to this.

*Also, I’m sorry to Clé Bennett, who is a fantastic Black Canadian actor with a fantastic voice. He is playing Lemar Hoskins/Battlestar, a real comic book character, who used to go by the name … Bucky. Yup. So that makes that one scene extra awkward, don’t it?

Back when the character was first created by Mark Gruenwald, fellow comic book writer Dwayne McDuffie told Gruenwald that “Buck” is considered a derogatory term among African-Americans. Gruenwald had not known of the racial connotation of “Bucky” and worked with McDuffie to create a story to address the problem and give Hoskins a new name: Battlestar.

“The magic of embracing diversity in the writers room and having an almost all-Black staff allows you to tap into pop culture. I mean, Black folk are the masters of it, and when we get a shot, to do what we do, it is universal for everyone because our struggle and our point of view is a concentrated version of the greater human struggle. So it is yeah, those moments you’re talking about are pointed, and we dig deeper and deeper and deeper as the series progresses.”

I am looking to see how deep it goes, and hopefully we will get more Don Cheadle as Rhodey.