"We need a way to introduce this new thing with a bang." "I know, how about we upset our users?" "BRILLIANT!" 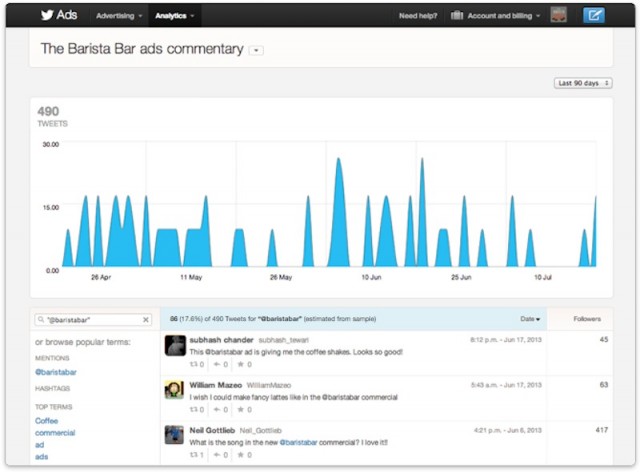 Twitter is pretty pumped about their new advertising product, which helps advertisers and brands track how many people are talking about their TV commercials on the social media service. But what if nobody is talking about a commercial? Well, Twitter will just put some words in users’ mouths, it seems. In a blog post about the service this morning, Twitter illustrated their example with a (since changed) graphic containing what appeared to be tweets from real users — except they were raving about a TV ad they’d never seen.

Notably, the faked tweets did not appear on the timelines of the users they’re attributed to in the blog post, so, congratulations to Twitter’s marketing department on getting exactly that much right, I guess? Except that implies that Twitter knew, on some level, that faking tweets from real users was a profoundly stupid and offensive idea, and then did it anyway. Seriously, folks, how hard could it be to make up a couple of dummy accounts if you’re just doing a demo, anyway? Or use the accounts of some marketing employees, which is exactly what they eventually did in an updated post?

Yes, this isn’t as bad as putting actual tweets on someone’s timeline, but it’s still bad enough to have at least one of the users talking to a lawyer about the possibility that the company used his likeness without permission, which…sounds pretty reasonable to us, actually. Nearly anything would have been better than giving people a glimpse of many folks biggest fear about social media advertising — that a platform will hijack our accounts to make us look like we’re shilling for a product we’ve never heard of.  So yeah, if you were looking for a way to show us that worst case scenario, mission accomplished.