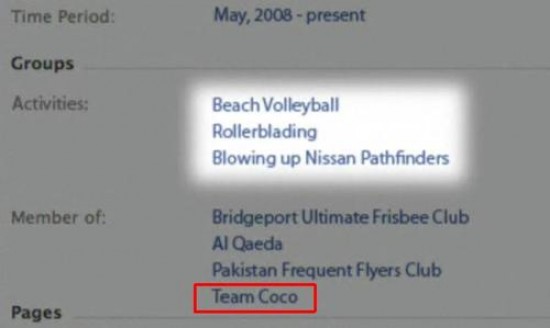 Add this to the list of things Jay Leno has done to Conan O’Brien that Conan would probably never do to him: In a Facebook-centric gag on last night’s Tonight Show, Leno briefly showed a fake Facebook page for Faisal Shahzad, the suspect in the attempted Times Square bombing this past weekend. (Since fake Facebook pages are always funny.) In addition to participating in such uproarious activities as “rollerblading” and “blowing up Nissan Pathfinders” and being a member of “Al Qaeda” and the “Pakistan Frequent Flyers Club,” Leno makes the terror suspect a member of Team Coco.

And this isn’t some Photoshopped Internet hoax, either: You can see it at the 3:45 mark in Hulu’s official clip from the show. Video evidence below: