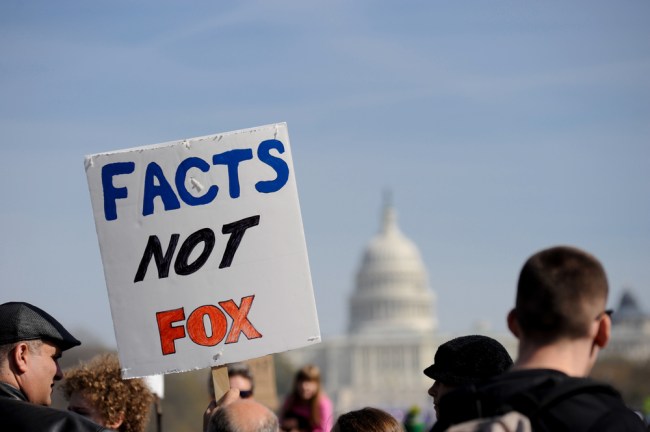 After more than 20 years, Fox News has dropped their iconic slogan, “Fair and Balanced.” Gabriel Sherman at NY Mag, who broke the story, reports that decision-makers at Fox thought the slogan is too closely associated with Roger Ailes, and has also “been mocked” by critics. It’s true, that slogan is hard not to mock. The idea that Fox News is fair and balanced in their reporting is ludicrous. Few people actually believe the slogan is honest. But that doesn’t mean it hasn’t been incredibly successful, not just for the network, but for the Republican party, who essentially use Fox as a conservative propaganda machine disguised as partisan news.

Roger Ailes never hid the fact that “fair and balanced” was a coded term. The slogan allowed viewers to believe, if they wanted to, that Fox was a legitimate news source, while what Ailes was really doing was “balancing” real news with conservative opinions. The network frequently manipulated graphics to skew statistics and staged debate segments so the conservative stance “won.” A senior producer told Sherman that Ailes would say, “The news is like a ship. If you take hands off the wheel, it pulls hard to the left.” His goal was not to explore the ocean. It was to keep that ship solely in deep conservative waters.

Roger Ailes wasn’t being coy. “Fair & balanced” appealed to conservatives’ sense of victimhood and need to hear their views “win” in media.

We’ll “balance” out that negativity with a world you can wrap yourself in where you’re always right. It’s brilliant from a marketing POV.

It’s right wing talk radio on TV, wrapped in the veneer of news. It’s been devastatingly effective for the Republican Party.

So what will replace “Fair & Balanced” as the network’s new slogan? Executives have reportedly been instructed to start using “Most Watched. Most Trusted.” That slogan–kind of brilliantly–takes all responsibility of content out of the equation. It’s basically saying “People like us. People believe us.” There’s no implied burden of having to care about facts. And with Trump, Fox, and the Republican party having dedicated themselves to convincing the American public that actual legitimate news outlets are “fake news,” this slogan is distressingly apt. Their content might be total right-wing propaganda, but people do watch, and a lot of people sure do believe them.