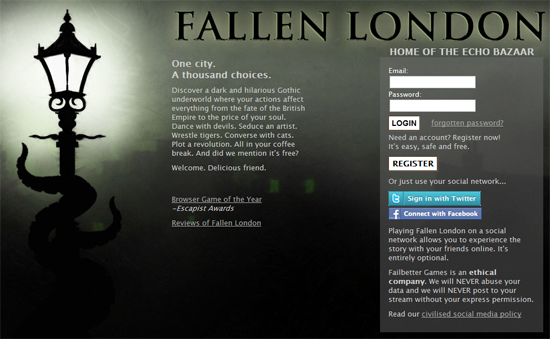 Games that can be played from the browser are typically dull, boring affairs that are mostly full of Flash-based shooting or castle defense. Sometimes, though, odd little text-based games make the cut. Fallen London — also referred to as Echo Bazaar — is one of those games. The sparse images combined with intriguing stories provides fodder for the imagination while the player plumbs the depths of an underground society. Failbetter Games, the developer, is now crowdfunding a prequel to this unique jewel titled The Silver Tree over on Kickstarter.

Players need not have played Fallen London to enjoy The Silver Tree but they’ll likely have a better grasp at the system underlying the game if they’ve played any other titles from Failbetter. The gameplay revolves around a card-based action system that delivers vignettes to the player. If their hand is full, they can draw no more cards and therefore not expand their options. They have to use one of the actions available to them.

The different backer levels grant a variety of bonuses. Sadly, the $500 Immortal tier — which grants a bottle of Hesperidean Cider in Fallen London — has already been claimed. People take theses games quite seriously. Other levels offer a falcon familiar for the original game, the opportunity to appear as a character or story in The Silver Tree, and exclusive content for the prequel. The highest tier, for $1,200, will even net backers a special story that only they can play.

The Silver Tree is looking at an October launch and funding ends September 2. Given that they only asked for $10,000 and already hit it, be prepared for some juicy stretch goals.