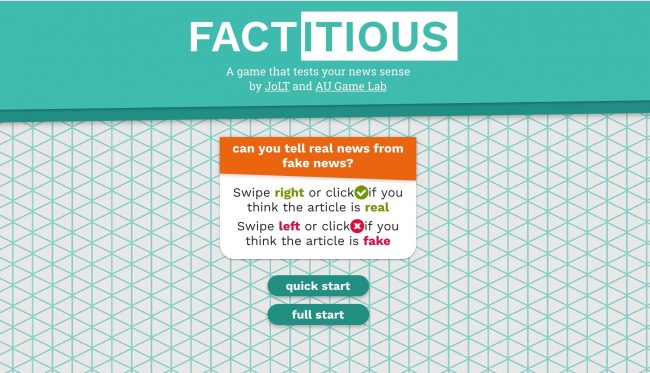 Fake news—actual Fake News, not the phrase Donald Trump throws at anything that displeases his—is a problem that spreads misinformation makes use of biases to intentionally deceive. As a result, critical reading and the ability to look beyond an inflammatory or sensational headline is even more crucial. And with a new game, it might be a fun process as well.

Veteran journalist Maggie Farley created the game Factitious with game designer Bob Hone at American University to test users’ abilities to spot the fake news among the real stories, which can be increasingly difficult when the real news is full of outrageous and terrifying stories that feel like they’ve been ripped from dystopian fiction.

The game operates like Tinder, except instead of attraction right means real and left means fake. Stories range from Trump quotes to bizarre local stories to celebrity news. You get an excerpt of the story, along with the source it came from and after answering the game gives you information about the website, and whether or not it’s a credible source. For those who might find themselves overwhelmed by the amount of information out there, Factitious can serve as a starting point to identify a few credible outlets and outright fictitious ones.

While Farley says the game was originally meant for “middle and high school students” NPR says, “In the end, the target audience was everybody.” They report that newsrooms, educations, and organizations will soon “be able to adapt the game to their own needs—it’s open source.”

What did you think of Factitious? How was your score?