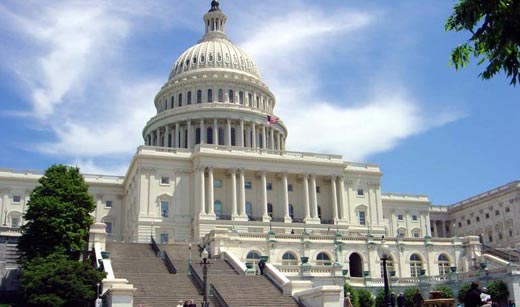 At the end of March, we learned that members of the United States Congress — meaning the House of Representatives and the Senate — were officially looking into drafting a bill that would disallow employers from asking potential hires for private login information for their Facebook accounts. States had been instituting laws on their own, but after more and more stories came out about people feeling pressured to hand over their private information by someone in the position of giving them a job, Connecticut Senator Richard Blumenthal said that enough was enough — this is something that needs to be dealt with on a national level. And now, the Social Networking Online Protection Act has made it to the House of Representatives while the Senate continues to work on their own version. Important question: Do we get to call it SNOPA? I’m going to call it SNOPA.

SNOPA was introduced on Friday by Reps. Eliot Engel (NY) and Jan Schakowsky (Illinois) and would ban employers from requiring someone to hand over their username or password to a social networking account. In case you’re keeping track of party lines, Engel and Schakowsky are Democrats, but Rep. Patrick McHenry of North Carolina is a Republican and was also working on a draft. So, this could very well have a lot of bipartisan support, which warms my heart in these polarizing times! We can all agree on this: human resources should not have the right to demand to poke around in our private business.

“We must draw the line somewhere and define what is private. No one would feel comfortable going to a public place and giving out their username and passwords to total strangers. They should not be required to do so at work, at school, or while trying to obtain work or an education. This is a matter of personal privacy and makes sense in our digital world.”

The bill would not prohibit employers from conducting an internet search to see what has been made public by a potential employee, but if there is something that a user of a social network doesn’t want someone to see, it’s up to them to make things private. SNOPA, however, would make asking someone for access to a private account illegal, and a company making such a request could be fined a $10,000 civil penalty. Something not addressed by SNOPA is email addresses, unless that somehow falls under the purview of social networking. So far, the wording seems to apply to only social networking sites, under which Facebook would certainly be covered. Facebook’s own policies prohibit the forced sharing of information, and has already threatened to sue companies who would demand it. (No such suits have been filed yet, to our knowledge.)

And if employers believe that their particular line of work requires such an invasive practice, they should think again: colleges, universities, and schools are also subject to the restriction.

So, we have a bill in the House! Watch this space for progress on amendments, the Senate version, and what entities might come forward in support or opposition.

(The Hill via Geeks Are Sexy)